The story so far: back in 2003, Tétreault and Yoshihide, who manipulate sound using extensively modified/misused turntables, embarked on a 15-date tour. Many of their improvised performances were recorded for posterity, and the best bits were culled for a series of three “themed” live albums. The first volume, 1. Grrr, featured the segments most likely to cause torrents of blood to gush from listeners’ ears. 2. Tok focuses on the rhythmic elements of the duo’s performances; they even go so far as to describe it as “beat-driven”.

Don’t be fooled by that phrase! Yes, 2. Tok’s material is more rhythm - and percussion - attuned than anything on 1. Grrr (most of which sounds like what a mosquito sitting on your index finger hears when you run your fingernails down a blackboard), but calling it beat-driven is like describing being chased by a herd of angry bulls as “a spot of exercise”. Beat-harried, more like.

2. Tok’s rhythms come without design or deliberate meter, which isn’t surprising - these are improvised performances, after all, and “rhythm” in this case refers to the sonic fluctuations created by applying a turntable stylus to a cymbal, or a piece of sheet metal, or another turntable stylus (no notes are provided regarding the specifics of the duo’s performance; we’re just guessing based on liner-note photos and recognizable sound-nuggets). Despite the lack of conventional musical form, 2. Tok’s stylistic remit allows for a far more varied dynamic range than 1. Grrr’s balls-out loudness. As a result, we’re treated to drone and flutter-based pieces such as Nijmegen no 4a / Extrapool 25.04.03, which sounds like someone attempting to tune a very loud short-wave radio while a lawn-mower runs nearby. The source materials are a lot more recognizable when the volume is lowered: we can actually identify needle-drops in Orléans no 1 / Astrolabe 27.04.03, among others, and Genève no 4 / Cave 12 30.04.03 includes identifiable turntable scratching.

If you’re not a noise aficionado or a sonic endurance buff, 2. Tok makes a far more accessible point of entry into Tétreault and Yoshihide’s oeuvre. That’s purely relative, of course - don’t plan on putting either disc on your iPod unless you’re a professional interrogator. 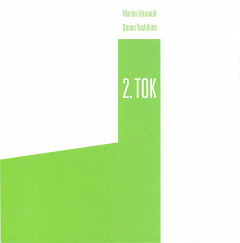