French bassist Joëlle Léandre is a very important performer of contemporary music, both composed and improvised, on both sides of the Atlantic. She has performed with the likes of Anthony Braxton, Marilyn Crispell, Georges Lewis, Evan Parker, Steve Lacy, and John Zorn, is a member of Pierre Boulez’s Ensemble intercontemporain, and an accomplished composer in her own right. Like Léandre, the Italian pianist Gianni Lenoci is at home both in jazz and composed music. His mentors in jazz were Mal Waldron and Paul Bley, and he shares Léandre’s passion for the music of John Cage and Morton Feldman.

Lenoci teaches at Italy’s Nino Rota Conservatory. He invited Léandre to give a clinic there, and also proposed a free improvisation recording session, and approached the Belgian radio presenter John Rottiers to handle the production end.

Sur une balançoire translates as “on a teeter-totter,” and it’s an apt term for the interaction between these two master musicians. There are fourteen beautifully crafted improvisations ranging from one-and-a-half to just under five minutes in length. The pace varies from intense to stately. Each performer employs the entire stretched range of contemporary techniques that are available for their instruments. They are so well attuned to each other that it’s hard to believe that they are not long-term collaborators.

As of late, Montréal’s Ambiances Magnétiques label has been quite successful in the export market. Albums like Balançoire are the reason. 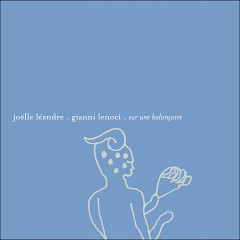 Sur une balançoire
As of late, Montréal’s Ambiances Magnétiques label has been quite successful in the export market. Albums like Balançoire are the reason.