The trio of saxophonist Jean Derome, bassist Norman Guilbeault, and drummer Pierre Tanguay performs ten of Derome’s originals on this intriguing set. Many of his pieces feature a structure built off of a rhythmic pattern played on bass while sticking to one chord throughout. As with the early Ornette Coleman Quartet, the music has a forward momentum and often utilizes a walking bass. Derome is in the lead almost all of the time, improvising in a lyrical and melodic style that occasionally erupts into more intense sounds, particularly during his two features on baritone. Guilbeault holds the music together while Tanguay plays very quietly much of the time.

The final piece, Michika, features Derome’s flute on a strong melody and is fairly conventional, but the remainder of the set is surprising in the trio’s ability to hold one’s interest despite jamming over one chord. Strong credit should be given to Derome who is heard on four different instruments.

His improvisations are thoughtful, inventive, subtle, and ultimately logical. 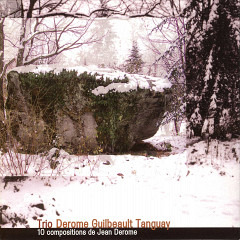 10 compositions
His improvisations are thoughtful, inventive, subtle, and ultimately logical.