Monsieur Fauteux is a sublabel of Ambiances Magnétiques. It is specialised in more accessible music then normally released on Ambiances Magnétiques. Martel began as a poet and published two collections of his poetry. Later he learned playing the guitar and developped himself into a singer/songwriter. He wrote all the songs and lyrics for his third solo-album Sautons ce repas de midi. Also he plays little guitar, ukelélé, theremin and harmonica.. He is accompanied by Bernard Falaise (guitar, mandolin, keyboards, voice), Éloi Deit (basses) and Michel F Coté (drums and percussion). Martel is not a great singer. I suppose the lyrics are very important — Martel is a poet. But alas I do not speak french, so I can’t say anything about it. Happily the arrangments and playing are very funny and full of ideas. Each song has it’s own atmosphere. This make this album enjoyable and worthwhile also for those who don’t understand french. It’s especially the guitar playing of Bernard Falaise that catches the attention.

Fanfare Pourpour reminded me of the Willem Breuker Kollektief or the belgian “ballroom” ensemble Julverne. This Fanfare has 15 members and is assisted by 5 other musicians in some of the tracks. We hear saxes, trumpette, clarinette, flutes, but also accordeon, guitar, violin, banjo, etc. On a reunion in 1995 several veteran musicians decided to play again together and Fanfare Pourpour was born. Nowadays veterans and young talents are united in this great ensemble.As the title indicates the ensemble plays a very danceable music, albeit often plunged in a melancholic atmosphere. Music from and for people. No self-indulgent art, or music for the sake of experiment, but music that wants to serve an audience, to make a party. The 16 compostions come from members Suzanne Babin, Luc Proulx, Jean Derome and others. The opening track opens very promising in a gypsy style, but halfway the piece takes another direction. We hear many waltzes, swing and more uptempo pieces, like the excellent La noce du brigand by member Guido del Fabbro. Although I’m open for this kind of music, my attention faded away from time to time. Some of the compositions are a little unsignificant, plus arrangements and playing do not sparkle throughout the ride. But surely an album of honest and pleasant music that will please many. 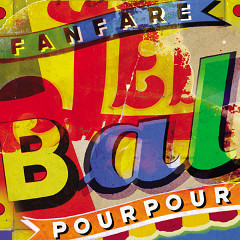 Le bal
… honest and pleasant music that will please many.