Often detached, dusty and irrevocably divorced from the context in which they were hatched, live albums tend to be museum-quality the moment they leave the mastering suite. Occasionally, though, a concert recording escapes the hobbling likelihood of staid sexlessness and captures as much animated verve as any studio project. Take Robert Lepage’s collaboration with Montréal’s La Nef. This three-part extravaganza, recorded at Quebec’s premier new music festival in March of 2003, begins with an eclectic cache of instrumental textures and ends with a portable version of Lepage’s most recent opus, which loses almost nothing in translation.

La Machine…’s thematic premise is simple. The composition begins with three idiomatic understandings of time (time passes, time flies, time slips by — called “Paradoxes” here) and uses each to guide a long musical movement from the outlands of avant-inscrutability home to the motherland of meaning. The result is stunning. Aided by La Nef, an ensemble of ten (including common chamber instruments and percussion, as well as guitar, banjo, tenor sax, viola da gamba, sackbut and live sampling) spools out the instrumentally dense compositions. The sheer conglomeration of the ensuing sounds would be enough to snare the open minds of many a curious listener, but the resonant respect for the audience inherent in Lepage’s complicated composition truly wins the day.

After an introductory address spoken in French over a pastiche of cuckoos, whistles and other frenetic clock noise, Confitures de sable eases in the proceedings with an armature of swaying, repetitious bass, splashing auxiliary percussion and gentle string swells. Loosely played flute and brass wash across the foundation with gentle, exploratory touch of a lover in patient heat. Then, like a freak parade in a conservatory, Le Tamponneur de triolet crashes in with a stomping insistence that, for all its initial bravado, ends up degenerating into a trombone and electronic effects duet that pulls off a wholly charismatic simultaneity of cranky savvy, flirtatious cloying and technical wizardry.

A seriously laid-back island vibe sets in with La Nef en bateau, at which point the remarkably organic fluctuation of disparate moods that informs the work is firmly established. Without ever interrupting the piece’s rum-cocktail fluidity, lazily plucked slide guitar, wispy flute, wandering violin and smarmy shaker dominate. Chronotopie du Cancer could be a Danny Elfman score, if only he weren’t stuck in the same always-recognizable chordal modes we’ve heard in countless Tim Burton films. The palatable insanity of the mood treads the line between intention and caprice without a missed step, and in closing the first movement, the track is a flat blast — and perfect punctuation.

In the second movement, Ennio Morricone rises from the grave, albeit through the funhouse mirror that refracts the entirety of La Machine…. Banjo, guitar, major chords and fickle entropy rise to the fore in the six tracks of this middle “Paradoxe,” whose highlight is Le Coup d’archet est toujours plus vert dans la cour du voisin, a gritty and heavily effected string solo that puts any all-star fiddling on live Yanni discs straight to shame. The movement wraps with a delicate waltz that may be the disc’s most derivative two-and-a-half minutes, but remain no less lovely for their lesser challenge.

“Time” indeed “slips by” in the “Troisième paradoxe.” Short, elegant and appropriately ethereal, the movement’s five tracks (excepting a break to introduce the musicians) work like a lubricated rub-down in the wee hours after a long, happily challenging day. The closer (Oups! J’ai échappé ma boîte d’accords majeurs!) slides through varying tempos while lightly hammering a two-beat alternation that brings this mad masterwork to an ideal denouement, as if Montréal weren’t already the front-runner for the Most Steamy North American Hotbed of the New Millennium Musical Vanguard Award. Phew! Now go towel off. 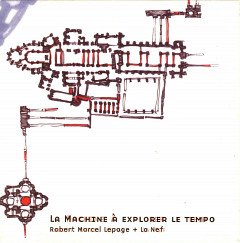