This is certainly not a typical Ambiances Magnétiques release, but definitely a typical one for sound/video artist Pierre-André Arcand, whose previous efforts came out on the Quebec City-based imprint OhmEditions. Atlas Epileptic picks where Transfuge + Transfuge hadleft, down to reproducing the twin set format of audio CD + video CD. Where Transfuge was a transitional work, Atlas Epileptic is (sound-wise) much more assured and convincing. Arcand is using the same (a)technological toys, from his atavistic sounding book and ashtray to his “macchina ricordi” (a self-programmed piece of Max/MSP software). Once again the music evolves through a process of transformative accretionary loops, but this time around the sound palette is significantly more varied and the music more dynamicand responsive. Transfuge was a rather cold disc, while Atlas Epileptic displays a certain warmth, even though the listener still feels trapped inside an enormous machine built for the sole purpose offunctioning. Arcand’s heavily treated voice is still an important soundsource and is responsible for any Industrial Coil, Nurse with Wound, Einsturzende Neubauten references the press has made. But Arcand’s soundworld is much more abstract, self-contained and enigmatic than even the more experimental disciples of that genre. The audio CD presents nine pieces (total duration: 69 minutes). The 10-minute title track and the 16-minute Un Casino à la Radio are the highlights and represent some of theartist’s finest works. The video CD (viewable as a CD-Rom or DVD) contains 11 pieces for a total duration of 49 minutes. The music component, while not being exactly the same as what is found on disc 1, uses the same soundelements and at times consists of edits or reworkings of the same tracks.Arcand’s video art is much more limited than his music. His image bank is restricted to only a few themes (kaleidoscopes, objects with facial features, penises, and computer screens). His fondness for making videocaptures of live computer screens sketches an interesting paradox: the analog capture of digital displays as if they were paintings. But otherwise his experimental videos are of limited appeal. Their repetitiveness tends to over shadow the fact that the music is actually much more varied. Taken in small doses (like Le Muezzin de Mayabunder or Moultécrans, these videos set the music in different, stimulating contexts. In larger helpings Dividing by Zero is Good, L’Érotique du Désert, they become a “viewing experience” one is not keen on repeating. 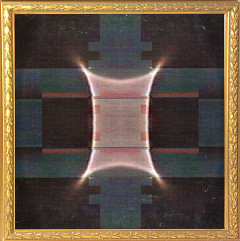