Francophone experimental/improvised music is not always the easiest sell. Even in these Freedom Fries days, I like to think that the reason for that difficulty rests with the “experimental” and “improvised” side of the description. If the preceding conjecture is indeed true, it’s hard to fault even the most open-minded listener for thinking long and hard before purchasing something like Magali Babin’s metal-scraping-against-other-metal-at-low-volumes opus Chemin de Fer.

On the other hand, however many times you’ve heard that old saw about music’s universal appeal, it’s nice when an instantly arresting yet thoroughly novel and interesting album reminds you of that concept’s veracity. Luminance is the kind of album that can, with proper exposure, gain converts to the improvisational and experimental side of music.

Warning: opener Plucky would be enough to convince any fence-sitting potential listeners that Lerner is just as obscure and dedicated to avant garde principles as anyone else in her field. The track, consisting of rhythmic piano-string pluckings, is unmelodic, arrhythmic, cerebral and not particularly endearing to the ears (not that there’s anything wrong with that). Immediately, though, the angular shapes it creates are metaphorically washed away by Deluge, a series of close, chromatically moving chords that jump thither and yon over the range of the keyboard. This latter track is far more representative of the tone and sound of the album as a whole; while Lerner certainly intends to explore musical concepts less formal than listeners acquainted with classical piano music might expect, she is not moving entirely in the direction of formless sonic experiment.

The best showcase for her balancing act comes with the album’s longest tracks. Rife, an exploration of a melody that seems constantly to be tripping its way toward a greater understanding of its underlying composition, incorporates chords that call to mind Cole Porter, scale passages that evoke Rachmaninov, and tonal meditations that could come from cool-period Miles Davis. Wolfen, the other centerpiece, is far more interested in a narrower range of tones; from the contemplative opening to the quasi-industrial, contrapuntal middle-period, to the calmer resolution, the tonal space that the piece inhabits seems narrower than that of Rife, lending the latter piece a more cerebral, less physical feel.

There are many other fantastic moments here, including the interestingly miked and teasingly titled Codec Moment (see the audio clip; this track is better heard than described) and the case-thumping La boxe. Mostly, though, Luminance is notable for its friendliness and inclusiveness. If you’re on the fence about whether or not experimental/improvised music is for you, here’s a little experiment. Pick up this album and listen to it a few times. If you can’t see why you should have it in your collection, you’re probably just not cut out to listen to the more “out there” side of musical expression. 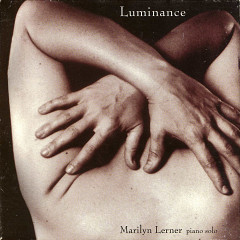 Luminance
Luminance is notable for its friendliness and inclusiveness.