Pierre Langevin studied clarinet and chamber music in Québec, Cleveland and New York. For some years he played bass clarinet in the Orchestre Symphonique de Québec. Later he developped himself into a multi-instrumentalist with a special interest in medieval music. In 1986 he formed the Strada Ensemble. He is a member and the artistic leader of the this ensemble. This ensembles focuses on medieval folklore music from Europe. But Langevin feels also attracted to new music and worked together with René Lussier and collaborated on many musical productions for dance and for film. Pierre Tanguay is also member of the Strada ensemble since it originated in 1986. It makes sense to memorate this common background of Langevin and Tanguay, as in their duo production La boulezaille, influences of medieval music are evident, like in Danse du vent comme dans le temps. Old traditional instruments are used as well. But among them also many of exotic origin. And this can be explained from another part of Tanguay’s background. As a percussionist he did additional studies in Africa, India and gathered (percussion) instruments from all over the world. Tanguay is a busy bee. He is co-founder of member of groups like Mara, Ogane Song, Trio Marc Villemure, Pierre Cartier Ensemble, Icarus, etc. Composed for theatre, film and danse productions and played with Nana Vasconcellos, NOMA, Tim Brady, John Surman, Barre Phillips, and many more. The Ambiances Magnétiques catalogue shows that Tanguay likes the duo-format as he worked together with René Lussier, Jean Derome and Tom Walsh. And now a work with Pierre Langevin. Like on his solo-album La musique de mon disque Tanguay brings a great diversity of percussive instruments to the studio as well as some self-built instruments. The last category show Tanguay’s interest in noise and sound. Langevin plays wind instruments like a duduk, bagpipes, pipe, recorders, a.o. and brings in themes reminiscent of medieaval times. Time and space barriers are broken down here, melting together in a very sympathic music that can be of no other age then ours. All eight pieces show the wit and humour both Pierres must have experienced. Surprises and inventive improvisation make it sensitive and enjoyable record. Both gentlemen use the great many instruments in order to ‘colour’ a music that shows love for detail. Well done! Jean Derome and Jean René both guest on one piece: La scie voleuse. 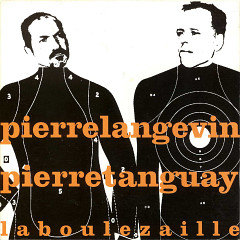 La boulezaille
Both gentlemen use the great many instruments in order to ‘colour’ a music that shows love for detail. Well done!