Les choses dernières was something very much different for Robert Marcel Lepage. Although he had been writing for the screen and the stage for numerous years, he had remained identified with his clarinet and, truth be told, had never put it down whenever music was concerned. But for the music to Lucie Grégoire’s choreography, Lepage made a wild move and scored a fascinating suite for string quartet and sampler. The sampling is done on the quartet itself (the Quatuor Caméléon), therefore its presence becomes almost unnoticeable. The 11 movements of Les choses dernières are segued and play on tension and release, on movement and stillness. Even though not a single clarinet sound is heard, even though the treatment here is a lot more serious and dark than usual, one can clearly recognize Lepage’s writing. His music always had a strong cinematic quality that came from his years of working with or without Jean Derome and René Lussier at the National Film Board of Canada. Les choses dernières takes up where Bernard Herrmann (who scored numerous Alfred Hitchcock movies) left, using plucking and quick, violent strikes of the bow as a mean to provoke emotional reactions, blending these techniques with Bartok’s sensibility. The sense of urgency felt in Urgence is on the verge of unbearable, making it the undisputed standout track. Les choses dernières shouldn’t be approached like an ordinary Robert Marcel Lepage album. The sound palette, mood, and form of the music are radically different than what he usually does. But those who understand his music on a deeper level will be charmed. 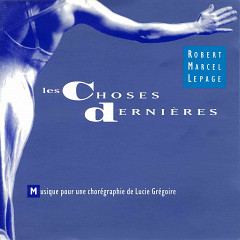