But we all know that country music or, more accurately, Appalachian and Québécois folk music — lies at the heart of Chadbourne and Lussier’s work, no matter what the context. For those who love virtuosic country guitar and banjo picking, this album is a treat. The surprise is that the duo play things as straight as they do, though they definitely push each other to the edge of psychedelic absurdity more than once before stopping back from the precipice — with just enough dissonance to keep the Nashville types at arm’s length.

Also included on the album is music recorded live in Paris in 1999, the only other time the two had played together as a duo. L’Oasis of the title is the name of an Algerian restaurant in Montreuil, near the hotel the pair stayed in at the time. The pieces from the Paris performance are jagged bursts of electric distortion that appear to serve as interludes among the Victo country tunes. This may or may not have been the intention, but the Victoriaville performance seems like the focus of the album. 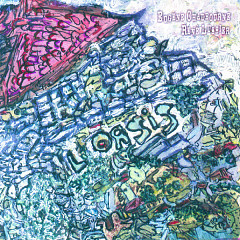