Ganesh Anandan’s previous projects were mostly seated in the cross-cultural world music field. This album sees him pairing up with two of Montréal’s most textural free improvisers, violinist Malcolm Goldstein and guitarist Rainer Wiens. Both favor sound over note, delicate textures over melodic or harmonic development. It reflects on Anandan’s playing. He rubs and brushes more than he strikes, finding ways to become a third and equal voice instead of providing rhythmic accompaniment. This studio recording presents an open-minded trio eager to shatter preconceptions about how “world music” musicians can be integrated to free improv contexts. A percussionist with South Indian roots, Anandan approaches the genre in a more singular (i.e. non-idiomatic) way than Hamid Drake, who’s frame drum playing always evokes Northern Africa. Anandan also plays the frame drum, but he is more often heard on modified tambourines (they have all kinds of shakers and bells attached to them), metallophone, steel drum, or kalimba. Wiens’ prepared guitar can be seen as an extended kalimba of its own, chiming in unusual ways, but always quietly and serenely. Goldstein is also in a subdued mood, bowing his strings in fragile strokes, but he breaks into a tantrum in a couple of tunes, mostly notably in Fra Ma Ga Ra. Guest saxophonist Frank Lozano also appears in that piece. It brings an interesting change of pace and color, but the key tracks are found in Twenty Fingers, Voyage en train, and Foreign Tongues, where the trio’s identity and originality are most striking. Speaking in Tongues is not the kind of album that will hit you in the face. It requires a few attentive listens to draw you into its world, but the effort brings its reward. 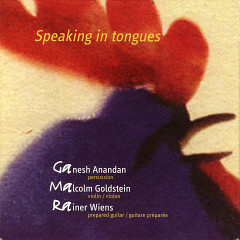 Speaking in Tongues
… an open-minded trio eager to shatter preconceptions about how “world music” musicians can be integrated to free improv contexts.