Pierre Labbé’s first album as a leader draws on his past experiences and sends them down a new path. Those who know the saxophonist/flutist for his work in the group Papa Boa will find in Risque et pendule a similar complexity in the writing — and an alumni, guitarist Bernard Falaise. But beyond the avant-prog leanings of Papa Boa, the music also draws heavily on modern chamber music and free jazz, styles one finds in the background of some of the ensemble’s musicians. Labbé has not quite taken down the walls between those categories, but he has drilled gaping holes in them, enough to let influences run back and forth. The result is generally cerebral while presenting exciting moments and retains a filiation to the “musique actuelle” that once was Ambiances Magnétiques’ main cup of tea. Combats de Coqs and Bloops come close to Papa Boa, but even closer to the circus-like avant-prog of Miriodor (in which, incidentally, Falaise also plays). Other pieces like Outrages, Le Blanc des Yeux, and Contrepoint du vide feature motifs and arrangements more reminiscent of chamber music, from Bartok to early Art Zoyd. L’Empêcheur de tourner en rond (which loosely translates to “He Who Prevents Us from Running in Circles”) stands out, not because it is a better piece but because its main theme is lifted from Ornette Coleman’s Video Games. Overtly jazzy, it introduces a nice moment of wildness. Labbé is a discreet leader, more interested in letting his writing shine than showing off his chops. Only in Sur la corde raide does he holds on to the spotlight, first in a sweet-and-sour experimental solo backed by textural atonal strings (the ensemble includes a string trio: violinist Nathalie Bonin, cellist Julie Trudeau, and bassist Frédéric Alarie), then in the theme itself, deriving an unexpected Indian flavor. Labbé’s melodies may not be very endearing — it’s not stuff to fall in love to —, but on this first effort his writing has originality, grace and precision. 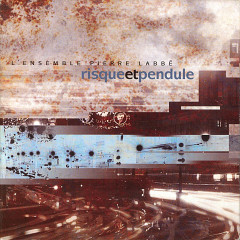