This album doesn’t come from an expected outlet — after all, Bertrand Denzler and Hans Koch appear to have no ties to the Ambiances Magnétiques collective prior to this CD — but it stands as a peak in the discography of both of these Swiss improvisers. Denzler (Hubbub, Chamaeleo Vulgaris) and Koch had been going down a path of gestural abstraction, digging ever deeper within themselves and the materiality of their instrument (here respectively tenor sax and bass clarinet, Koch also plays soprano sax) to find unheard sounds and develop a new musical vocabulary. Their search parallels that of John Butcher, Wolfgang Fuchs and Axel Dörner. Working as a duo, they apply this new vocabulary in conversation, articulating squeaks, burps and key clicks into an eery jungle-at-nightfall soundtrack. Tongue stabs, multiphonics and circular breathing represent only the tip of the iceberg of their extended techniques. The set is short (37 minutes), but thoroughly captivating. The highly challenging nature of this album is balanced by a wide diversity in textures and dynamics. Asymétrie 1 sees both musicians alternately listening minutely and stubbornly ignoring each other over 17 minutes of subdued pyrotechnics and brilliant creativity. But the highlight is Asymétrie 3, full of fluttering tongues and clattering fingers. The duo’s direction is less clear in the last piece, but it represents a minor flaw considering what came before it. In Asymétries, Denzler has pushed his art further into abstract, so-called non-idiomatic improv. It is one of his most difficult records. 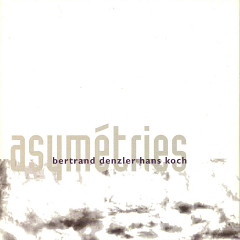