Hot damn! After digging through what seems like a thousand discs of half-hearted indie-rock blandness, I’ve found some gypsy improv jazz.

Ipso Facto, part of the fledgling (I believe) Monsieur Fauteux, m’entendez-vous? street musician collective, are apparently authentic Quebec gypsies. I can’t honestly claim to know what this signifies; for all I know, they live in wooden caravans parked on the darkened backstreets of Montréal as opposed to, say, shacking up in a big old polluted loft space with eight of their closest friends. It doesn’t matter. The quartet’s music — a jaunty, sometimes ribald mix of violin, acoustic guitar, contrabass and percussion — sounds like classic gypsy tunes, rooted in the rich mystery and wanderlust of Eastern European musical tradition, but also channels the passion and uncertainty of modern exploratory jazz.

Prohibition-era hot jazz borrowed liberally from gypsy and Jewish music, particularly its use of violin as primary “voice”. Ipso Facto compresses all of those approaches into a single aesthetic. Violinist Chantal Bergeron is the group’s driving force, and her instrument defines each song’s emotional standpoint: she pushes Attention Zingaro in a rollicking and dangerous direction, fills Yiddish Meshugass with a dark and mildly mocking air of mystery, empowers Soleil Rouge’s mournful tango, helps to bring Voltapük to a jazzy boil and heads down south for the country swing of Crazy Cowboys. And let’s not forget Kosmos Klezmer, in which Bergeron’s violin functions as a time-honored stand-in for the traditional clarinet.

Guitarist David Bussières connects Bergeron’s dots — which, on album, relegates him to something of a secondary role. That’s ironic, given that he wrote all but one of these pieces (Y fait frette à Madrid, for which Bergeron shares credit). Bussières picks and plucks his way around the fretboard rather than sloshing through endless barre chords, but his nimbled-fingered performance, which owes more to classical guitar compositions and certain noodly-guitar-intensive strains of jazz than rock ’n roll, is initially overshadowed by the violin. On a few tracks, his work stands out immediately — see the mournful Alchimie and the gloriously twisting Kosmos Klezmer; elsewhere, his details will only be revealed over the course of repeat listens.

Simon Dolan (bass) and Francis Roberge (percussion), as the rhythm section, have significant control over the group’s direction. Dolan’s steadfast, thrumming rhythms ride herd on every tempo; hear him hold Yiddish Meshugass in syncopated check, slow L’Affaire Mendoza to a distraught crawl, and spur Crazy Cowboys onward in a jazzy two-step. Roberge, meanwhile, is the group’s stylistic anchor, pinning each tune to a specific mood. Through Roberge, Yiddish Meshugass acquires its endearing woodblock rhythm, Kosmos Klezmer gains the brush-, shaker-, bongo- and tambourine-driven electricity of a free jazz workout, and Voltapük careens jazzily (and a bit disjointedly) through a grab-bag of percussion concepts.

There’s a flaw here, but it’s unavoidable. Simply by committing their music to tape, Ipso Facto rob themselves of much of the unpredictability that must be unleashed, full force, during their live performances. That also means that La spirale de l’escargot isn’t as “improvisational” as it could be; each of the disc’s twelve pieces allows room for the quartet to stretch, but their explorations seem fairly structured as a matter of necessity. We’re therefore spared the sometimes painful moments, amply documented on a few of parent label DAME’s more envelope-pushing releases, in which group members stretch for a sonic convergence that’s clearly beyond their reach — but we’re also denied the truly transcendent serendipity of an eight-minute jam session in which everything clicks. Fair enough; this is Ipso Facto’s first album, and they’ve done a laudable job of capturing the spirit of their hybridized gypsy jazz. Don’t be surprised, however, if after a few listens, you’re dying to see the group play around a forest campfire — as free from rules, obligations and limitations as they gypsies whose blood they claim to share. 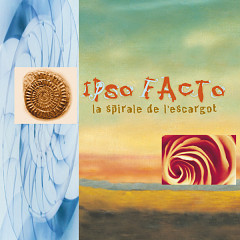