Sylvie Chenard (Valleyfield, 1957) is a multi-talented artist: composer, performer (electric guitar), writer. She fights many battles. Her work reflects her engagement with feminism, pacifism, and many social and ecological (whale) themes. Les projets de la Baleine for example reflects her interest in the strugge for surviving of the whale. For this cd she collected compositions recorded between 1994 and 1996. With these two new cds all attention goes to the environment of the whale, that is the ocean. The oceans are for sale. Culture is for sale. The cult of consumerism is for sale. There is nothing left to buy. Océan à vendre is a cooperation with composer, performer and multi-instrumentalist Jon Asencio. He is a veteran of the Montréal music scene. He played punk, reggae, pop, jazz, experimental and electronic music. For this cd with Sylvie Chenard we have an example of his electronic and experimental music. Asencio is playing bass, voice and sampler. Chenard plays electric guitar, electronics and voice. As a guitarist she is inspired by Frisell, Ribot, Chadbourne and Frith. No conventional guitarplaying here. She developed a style that is non-agressive, but on the other hand she does not want to comfort lazy ears. No pompous political songs, but radical experimentation. She seems to prefer to work in duo combinations. As the cd Hybride (1999) and Manifeste pour contrer la violence faite aux femmes (2000) have also duos. Océan pour la suite has Chenard duelling with Tetreault (tourne-disques), Poulin (sax) and St-Onge (bouche électronique). The duets with Martin Tétreault I like most. But that’s because I’m a admirer of Tétreault. Other pieces made no strong impression on me. But I can recommend her music to those who are in for radical improvisations. 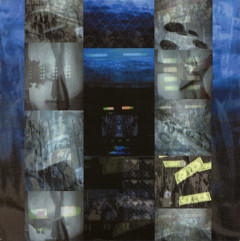