A Montréal native, where he is still based, guitarist Bernard Falaise exploded on the new music scene in the late ’90s, appearing in many Ambiances Magnétiques-related outfits, especially in avant-rock oriented groups that included drummer Rémi Leclerc (Miriodor, Les Projectionnistes, Papa Boa). He is also active on the free improv scene, playing with Klaxon Gueule and Robert Marcel Lepage among others. His distinctive guitar style, at times raw and twangy, at others highly atmospheric, set him apart in the same class of originals as René Lussier. He is also a much in-demand record producer and has composed contemporary classical music in his spare time for the tango ensemble Quartango and the saxophone quartet Quasar.

Falaise was born in 1965. Little is known from his formative years. He picked up the guitar in his teens and came to music from the progressive side of rock — King Crimson’s Robert Fripp is an obvious influence. He studied music and started to work professionally in the early 1990s, joining the avant-prog group Miriodor. The group’s fourth album, Jongleries Élastiques, came out in 1995 and introduced his playing to fans of the genre. The enthusiastic response to the album ensured he was dutifully acknowledged for his important contribution to the group’s refreshed sound.

In 1999-2000 Falaise diversified his activities, reaching a wider audience. He co-wrote with Côté the music for Robert Lepage’s film “Nô” and began to work with alternative pop artists. He co-produced the first album by Jorane in 1999 and the next year produced and played on Marie-Jo Thério’s acclaimed CD “La Maline.” The number of awards and praise this album gathered assured him a first-class status as cutting-edge producer. In the meantime he released his first solo CD, Do, a collection of multi-tracked guitar pieces. 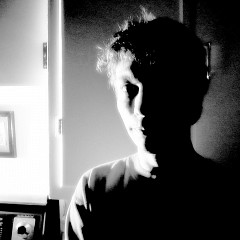 Bernard Falaise
His distinctive guitar style, at times raw and twangy, at others highly atmospheric, set him apart…