The Montréal trio Évidence approaches Thelonious Monk’s songbook from a new-jazz perspective. Alto saxophonist Jean Derome, electric bassist Pierre Cartier, and drummer Pierre Tanguay all have extensive experience in avant-garde music fields. This first album, simply titled Musique de Thelonious Monk, was recorded in October 1992, six years after the trio’s inception. The repertoire highlights classic Monk compositions like ’Round Midnight, Misterioso, and Well You Needn’t, but also gives attention to lesser-known tunes such as Hackensack and Ugly Beauty. Évidence’s second album, Live à la Casa (2000) will feature more adventurous choices. In any case, the selection itself matters little, the force of this trio residing in its arrangements. The lack of a pianist gives these tunes new life, thanks mostly to the way Derome uses split-tones to simulate Monk’s minor seconds (especially in Hackensack) and plays around the chords to suggest them. The musicians interpret Monk’s music the way they hear it in their heads. Respect for the original was a ground rule, but since the pianist himself was known to take many liberties with his compositions (and those of others), Derome, Cartier, and Tanguay didn’t refrain from pursuing their pleasure… and ours. Yet, Musique de Thelonious Monk sounds more sober than its follow-up. 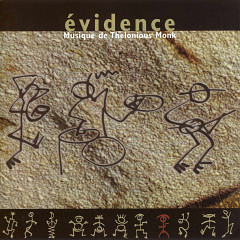