Les métamorphoses clandestines is one of Robert Marcel Lepage’s first compositions for the stage or the screen, in this case a choreography by Louise Bédard. It was released by Ambiances Magnétiques (of which Lepage is a co-founder), in the label’s Archives Magnétiques cassette series, in a very limited edition of 250 copies. This album features Lepage on his trustworthy clarinet, but also on bass clarinet, saxophone, synthesizer, and percussion. The only other contributing musician is trombonist Michael Wilson. The music ranges from clarinet solos to more textural pieces. It doesn’t have the strength of his suite for string quartet Les choses dernières, also written for a choreography, but it displays a nice balance of the seriousness and playfulness found on his first album La traversée de la mémoire morte. The rarity of this little-known album endows it collectable value, in addition to being enjoyable, even though it is clearly not an essential item in Lepage’s discography. 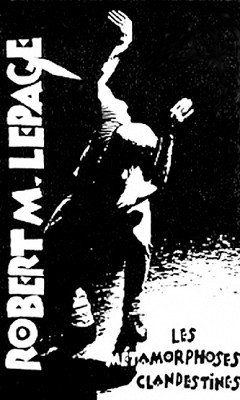 Les métamorphoses clandestines
The rarity of this little-known album endows it collectable value, in addition to being enjoyable…