The Halifax-based duo of Arthur Bull and Daniel Heïkalo appear as smitten with the sonic possibilities of the guitar as Brady, athought they work exclusively at low volume, creating dialogues of rattling strings, percussive scrapes and slithery e-bow slides. Their open-ended improvisations require close listening to reveal the full spectrum of sound.

At their most effective, on the eight-minute tiltle track, the tow can create intense mosaics that ressemble an Indian raga in both intensity and form, or-on Trente-deux légions de bilboquets visigoths- generate the tonality and flow of a gamelan group.

But those types of long-form workouts are the exception. More frequenly Bull and Heïkalo indulge in brief scurrying exchanges such as the flurry of electric and acoustic notes that fly on Whatever That Chord Was… (It Had To Be The Final Chord). It’s worth nothing that this closing song marks the only time that Heïkalo employs and unadulterated acoustic tone. 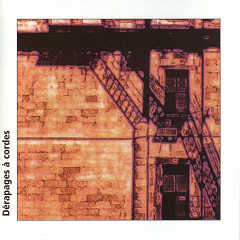