The combination of sax and voice is a hard one, particularly in a duo — it reminds me of something Raymond Chandler had Philip Marlow say about a client’s interior decoration “The curtains were white and the carpet was cream — the curtains made the carpet look dirty and the carpet made the curtains look washed out” Nous perçons les oreilles is a duo CD with both musicians playing alto sax and voice (Derome also plays various small instruments) and consists of a series of live improvisations recorded mostly in 1996, some as long ago as 1994 — and it is a brave attempt at something quite difficult Hétu and Derome use interesing and diverse techniques, and lots of humour, but rarely transcend the impression of an eclecuc series of varied sounds with uansinons often accomplished via mimicry Jonquille is an exception to this, with both musicians gently and soberly reciting a list of unconnected words, but even then, just as I relax into the weird hypnotic simplicity of it, a jaw harp breaks the spell and introduces an instrumental and vocal improvisation — which diminishes, rather than enhances, the preceding section. Perhaps the fact that Hétu and Derome have been or are a couple is part of the reason for a shamelessness about sounds which works better with the vocals: a playful intimacy that allows all sorts of silly voices to come out — on Léa, a vocal duet this is paracularly effective they seem to be playing a game of verbal tag and mockery. This impression of a kind of mocking recurs often elsewhere when Derome breaks off and plays kazoo or whist e or other petits instruments a vent, but is less successful in these cases, because the transitions are too marked and seem kitsch without being genuinely funny. The eclectic and fast-changing nature of many of the rest of these improvisations, and the fact that some were recorded in 1994, made me wonder whether a pertinent question about improvising now is no longer so much. “How to change as quickly as possible?“ and include as much as possible?“ as “How to improvise without changing?“ Listening to this CD I often wished that the players would stick a bit instead of twisong. 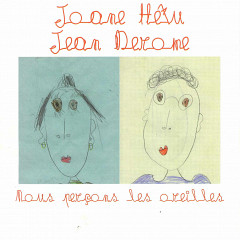