Violinist Malcolm Goldstein, drummer John Heward, and guitarist Rainer Wiens had been playing together for five years or so when they recorded this first album in the studios of Radio-Canada, Canada’s French-speaking public radio. The trio features all the qualities expected from an experienced free improv outfit: synergy, listening capacity, compatibility in the choice of techniques. Goldstein’s signature is the most prominent one on Chants cachés (Hidden Songs). That is not to say that he leads the trio, but he has a way of setting the mood. His very personal vocabulary finds remarkable echoes in Wiens’ prepared acoustic guitar. Heward adapts his playing to the other two, using mostly his cymbals, his scrapings joining in with violin and guitar. The music is delicate, textural, inhabited by a restrained energy that only makes it more intense. Just listen to Heward keeping Trio 3 alive while the other musicians take a few steps back in order to leap farther. Chants cachés is an unlikely release for the Montréal label Ambiances Magnétiques — it was their first CD of acoustic free improvisations. Considering how Wiens’ work is so under-documented, one can’t help but be grateful. 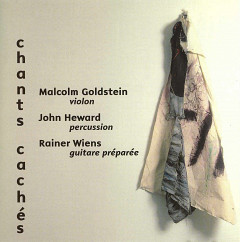