This disc was recorded live in Quebec in 1997, with Jean Derome on saxophones, flute and various small wind instruments and Pierre Tanguay on drums, voice and percussion. Most of the pieces seem to have a mix of composed and improvised parts. The vibe is generally light and even silly at times, although that’s not meant to imply anything about the level of playing; Derome and Tanguay are both sensitive, dynamic players with enough range to pull off the lighter stuff without looking like lightweights. And when it’s time to squeal, well, they can do that too! The mix of composed and improvised sections is this disc’s main asset; the tunes pull you in and help you keep track of where you are, while the spazz-out sections keep things from getting too Kenny G (although Derome’s sax veers dangerously close to lite-jazz a couple of times during Djuni). I imagine that these tracks would be a lot more fun live than on CD, as is often the case — particularly given this duo’s good natured energy and dynamic playing style. They seem to play at lots of jazz festivals, so check them out if you can. 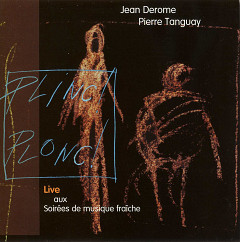 Plinc! Plonc!
Derome and Tanguay are both sensitive, dynamic players…