This duet CD documents the quieter sides of two amazingly creative musicians. I write this review having seen them perform just last night at Toronto’s Music Gallery where they reiterated that nothing they were playing was from this new CD, which René Lussier still peddied hard during song breaks. They downplayed it, said it cost too much, and ignored it for their set-list. This routine showed their sense of humour (which pervades their improvising) and an engaging acceptance of non-commerciality and high creativity.

The quieter sides of Lussier and Tanguay are as jarring as the blasts of elastic noise they can generate on stage. Chèvre features Lussier playing acoustic as well as electric guitar, which leaves him with less to work with in generating and altering sounds. It forces Pierre Tanguay to take a different tack on drums, too, and they both assume the space with brilliance. It’s a small, mischievous record by two friends driven on by each others’ imaginations and compositional structures Where or how these songs exist on paper, we don’t know. We can just be glad that this CD is available. No matter how hard they migEt try to convince you to pass it by, Lussier/Tanguay La vie qui bat, Chèvre whichever is the title— is a brilliant example of laughing minds a-hold of guitars and drums. 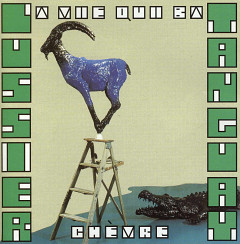 Chèvre
… a brilliant example of laughing minds a-hold of guitars and drums.