Pierre Tanguay is ready for his first solo album. it is striking that several other musicians of the Ambiances Magnétiques - collective also produce solo - albums in the last few years: André Duchesne, Joane Hétu a. o. After playing many years in all kinds of groups there seems to come a moment you want to do your own thing all on your own. Pierre Tanguay played with some twenty established groups, such as Dangereux Zhoms, Castor et compagnie and Karen Young and is founder of Strada, Midi Tapant and Derome Tanguay Danse. Tanguay has produced five albums and collaborated closely on some fifty others, and has more than twenty compositions for dance and a number for theatre and film (Allan Booth, Imago and Roberto Ariganello) to his credit. his music shows the wide range of his experience in ancient and contemporary music, jazz, and music for dance, theatre and cinema. Born in Québec city in 1957, he has devoted himself to music full-time since 1978. On La musique de mon disque he makes here his solo statement, using percussion, selfmade and recylced objects and voice. The music on his new cd is best described as ambient-like and minimalist music. Music for imaginary rituals. Not at all the thing you expect from a drummer and percussionist who uses to play modern jazz and new music. So maybe it is no coincidence that Tanguay plays together with Jean Derome in a church somewhere in Groningen (Holland) on 2 September 2000. 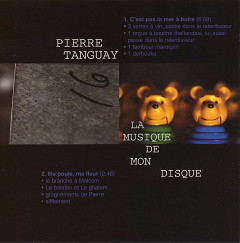