Our final CD here is from The Fred Frith guitar quartet. The idea of a guitar quartet makes perfect sense, really, if you consider how back in the early ’80s the World Saxophone Quartet, taking a page out of the book describing the string quartet’s structure, decided to write a repertoire for itself (consisting as it did on its inception of jazz giants David Murray, Oliver Lake, Julius Hemphill and Hamiet Bluiett, they had no trouble doing so) as well as to commission works to perform from modern composers. Fred Frith needs no intro, of course, and neither do his fellow axemen Nick Didkovsky, René Lussier and Mark Stewart. The most striking piece on Ayaya Moses is Pulau Dewata, a Claude Vivier piece of bewildering but lovely complexity, combining pure bell-like cadences with busy structure and slipknot-like turnabouts. There are odd bits here that recall the complexity of gamelan music and others that build expertly on the highly structured efforts of 1972-74 King Crimson (Fracture, We’ll Let You Know). No shrinking violet, however, is the opening Ayaya, written by Lussier and combining a sly pop-like opening and some feedback experiments that will make your eyebrows disappear once the shock of the initial wittily shifting structure is swept aside. Olivia Bignardi, an Italian clarinet player and modernist, contributes two tart bits full of interlocking riffs and careful melody, and Frith of course, writes one of his more concise tunes (Freedom is your Friends II). It’s almost a chamber piece for highly controlled feedback, and might at some point show up in a later composition for string orchestra, it’s that plastic. Nobody woodsheds here, nobody shows off, in fact it’s hard to figure who’s playing what from time to time. You’re forced to listen to the totality, to throw your attention wide, and I think that’s a credit to the players: any one of them could have showboated the other three offthe stage, but of course then this CD wouldn’t exist. And that would be a shame. So I hate to disappoint anyone, but the guitar is not going anywhere. These fellows will see to it, and thanks to all of them. 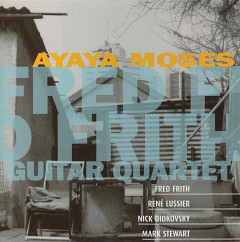