I can honestly say that Chante! is a thoroughly charming recording. “Charming” isn’t an adjective I often use in describing stuff from Ambiances Magnétiques. Esoteric? Yes! Provocative? Yes! Imaginative? Yes indeed! Oddly enough, though, the result of compiling these individual tracks from eighteen distinct AM releases is such that I can only describe it as “charming!” The cast of characters is familiar to longtime Splendid readers: René Lussier, Jean Derome, Joane Hétu, Pierre Tanguay and others. Each track seems to have been touched by many of the same hands, yet each is quite distinct. Some are jazzy, some are folksy, some are bluesy, some are atmospheric, and all are clever and creative. But while a whole album of any one of these styles might leave me feeling oversaturated, in this more limited context I find myself both enjoying the current track as well as eagerly anticipating what will come next. If I had to pick a favorite piece, I’d go with Les Granules’ excellent, tongue-in-cheek La bombe. 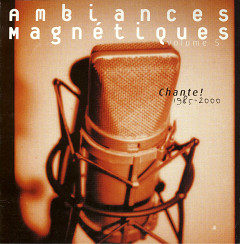