Somewhere between the cultural straitjacket of the Arpin Report and the rampant eclecticism characterizing the music of the late 20th-century lies René Lussier and Le Trésor de la langue.

Picture a young guitarist honing the folkloric traditions of Québec during the Me decade in Conventum, yet hooked on a progressive musical revolution across the Atlantic in European groups like Henry Cow, Etron Fou Leloublan, Stormy Six, Magma, and Faust. Imagine a music where everyday sound, folklore, free jazz and social protest meet at the crossroads Québec has dubbed musique actuelle.

Put them together and you get Le Trésor de la langue, a painstakingly assembled musical composition inspired by the spoken word, an archival document that lives and breathes, an award-winning work (the Prix Paul-Gilson, awarded for excellence in radiophonic work) that’s souvrainiste in principle, yet not political. In short, music that’s neither fish nor fowl. Or, more appropriately, mi-figue, mi-raisin.

“It’s a funny thing,” says Lussier, relaxing in the kitchen of his renovated turn-of-the-century house by the shore of the Richelieu in bucolic Mont-St-Hilaire. “Québec will encourage anything that is in French. But the minute you’re doing music, even if you’re French, you have to get some help from outside Québec. It’s not like the printed word, like books or the theatre. To cultural bureaucrats, instrumental music doesn’t mean that it’s culturally French. They’ve got a problem with their brains in this sense. “

Above all, it was the sing-song timbres of everyday speech he wanted tocapture. “There’s always something melodic in everyday talk. So much music all around us. In talking, there’s very complex rhythms and melodies, often all in the same breath. Sometimes more complex than contemporary music. “

So, with Claude Beaugrand, a stack of tapes and a Nagra, Lussier set out on the road for Québec City.

Lussier and Beaugrand certainly had it easier than the first archivists in the 1950s, who ran a long wire and microphone from their running cars (to provide current for the huge recorders) into storyteller’s shacks in the countryside, capturing the legend of Ti-Jean or the tale of the Crooked Man for posterity.

“My original idea was to do a compendium of different accents in French in Québec. I was listening to one woman’s tale, and I didn’t understand a word. I was just writing phonetically. And it wasFrench. It was not so far from here. There’s some people who have very strong accents. And it’s not dialect. At a point I decided to not become a monk, I left that to the linguists. “

On the record Lussier thanks two people for their collaboration and their complicity Claude Beaugrand and Richard Desjardins. Beaugrand is an old friend, a skilled sound tech who was at home recording in the field.

“At the beginning we were so shy,” recalls Lussier. “I didn’t have much experience in interviewing people, like you do. You’ve got a purpose, you have a subject, a list of questions. We didn’t. Even Claude, who had done a lot of documentaries, didn’t have a camera to hide behind. “

Needless to say, many of the interview subjects responded in the positive. Add to this excerpts from speeches by Charles de Gaulle and an extract from the FLQ Manifesto, and, at least on the surface, Le trésor de la langue appears to resonate with nationalistic vibes, a sort of Enfin Oui René set to music.

“I was excited about those speeches, probably more about the FLQ than De Gaulle, but my initial idea was not to provoke,” Lussier claims. “lt was me learning my own history. When I went to get those archives through CBC or other sources, I was acquiring pieces of my history that I wasn’t aware of when they had happened.

“Some people of course saw it as a nationalistic statement. I didn’t consciously write it that way, I see it more as a historical work, with others might say it’s a linguistic work, or a musical work. I did think it would freak out a lot people at the state radio. So people at Radio Canada really like it, while others said it’s really interesting, but we’re gonna have problem with this FLQ stuff. “

Many have asked Lussier if province’s political climate play any part in the release of the album but he takes the fifth. “Personaly I’m not so interested in the nationalistic politics. I think they’re laugh,” he says. “ln Québec, we have some problems we’d like take care of ourselves. I can understand that. But when they wan build a cultural bureaucracy it will judge if a book, a record, art work, a play, is worthy of be produced or not, that’s dangerous. That’s going to be a big probem. For all of us. “ 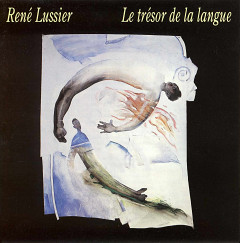