Soyez vigilants… restez vivants! (Stay Alert Don’t Get Hurt) wasn’t Montréal reed player Jean Derome and guitarist René Lussier’s first collaboration, but it was the first to find its way on record. The two had been working together since 1982 as the duo Ambiances magnétiques (which has been at the origin of the label’s inception) and in numerous film music projects. While their next LP Le Retour des Granules will be more focused (using the term loosely), this one is more of a mixed bag. Still, the Les Granules (they will release their third album on CD in 1992 under this name) sound is already firmly in place: a blend of rock, improvisation, contemporary music, found sound, miscellaneous instruments like bird calls and French-Canadian traditional music. The album includes the first recording of Derome’s Oiseaux, (Birds) which will get a bigger treatment on his album Confitures de Gagaku (Disques Victo, 1988). I a collaboration between Lussier and ex-{Conventum mate André Duchesne, is a beautiful progressive rock piece reminiscent of their old band, but also of early Maneige and of Canterbury prog rock. The totally far-out/almost comedy music style of the duo is found in Le Boudin de Noël (The Christmas Blood Pudding), a deconstructed folk song supposed to depict a Christmas dinner, including an actual recipe and a vocal trio. Chante ta chanson (Sing Your Song) and P’tit Pain (Bun) address the sociocultural reality of French Canadians, a theme that will resurface in René Lussier’s seminal recording Le trésor de la langue. The LP included a lyric sheet with liner notes in French and in English. 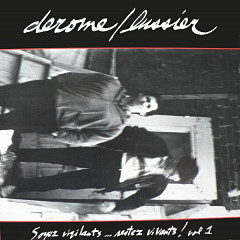