Crossing the Atlantic, we arrive in French-speaking Canada and the usually interesting Montréal based label Ambiances Magnétiques. Their most recent release (on the subsidiary Archives Magnétiques 04) is L’oreille enflée by Danielle Palardy Roger, Roger is the drummer for the band Justine and here she is joined by fellow members Joane Hétu (rds, vcl) and Diane Labrosse (vcl), as well as other luminaries from the Montréal creative community: Jean Derome (rds, flts), André Duchesne, Marie Ouellette, Mercedes Roy. This appears to be a radio play and it’s performed entirely in French so it’s a little difficult for a monolinguist such as myself to get a key in on the action. But the music is an intricate through-composed tour-de-force relying heavily on Hétu and Derome’s reeds and live and sampled sounds/percussion. A comparison might be marde to some of Henry Cow’s more scored moments but this is music with its own unique character. Very enjoyable, if a bit obscure. 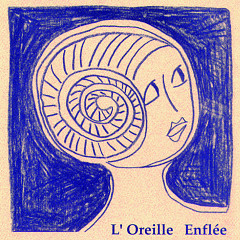