Qu’ouïs-je? (an old-fashioned french form of saying “What do I hear?”) is the follow-up to René Lussier and Martin Tétreault’s 1999 Dur Noyau Dur. Although the track titles all end in “ure” just like the previous record, Qu’ouïs-je? is very different from its older brother. This time around, instead of rubbing his guitar strings with steel wool, Lussier focuses on the daxophone (a bowed instrument invented by Hans Reichel}). As for Tétreault, he works less inside his pick-up and experiments with analog synthesizer and beat box. The resulting music is a lot less abstract and unidimensional than on Dur Noyau Dur. There is much more happening: the music squirts, jumps and stumbles out of the speakers. The shortness of these improvs allows for frequent changes of settings and eludes over-stretched ideas. Both musicians play with (and not from or over) each other, creating short-spanned musical universes of twisted sounds and surprising encounters. Most of the times, the listener cannot tell who plays what and how they did it — remember the CD’s title? While Dur Noyau Dur was serious to the verge of pretentiousness, Qu’ouïs-je?is playful and entertaining while proposing a strong artistic statement. 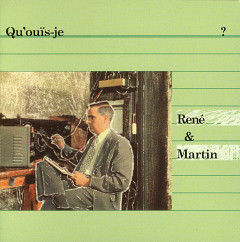 Qu’ouïs-je?
… the music squirts, jumps and stumbles out of the speakers.