In May 1999, French bassist Joëlle Léandre was in Montréal for a concert and a recording session with drummer Danielle Palardy Roger (ex-Justine, Les Poules, Wondeur Brass). The result of this encounter was released in early 2000 by Ambiances Magnétiques under the tittle Tricotage (Knits), a feminine title for an album soaked in feminine sensibility. The two improvisers make one with their instruments, Léandre letting sighs and moans escape along the way (like on the beautiful Knit One, Purl Three). The pretentiousness found on Ambiances Magnétiques releases from the same period is absent on this CD; the music goes down to the roots of improvising, taps into the unconscious: a bass that can sound like a drum playing with a delicate drum set that could almost sound melodious. Tricotage is a very organic record, quite sensual at times, and makes an enjoyable listen. 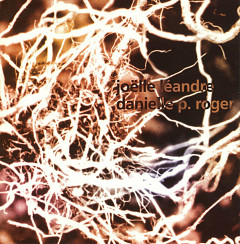 Tricotage
Tricotage is a very organic record, quite sensual at times and makes an enjoyable listen.