Samplers tend to be the orphans of most labels’ output, often incoherently compiled hand me downs from previously released discs they are frequently overpriced and tend to be acquired by accident or misfortune. Few people would openly admit to considering them worthy purchases. Inedits (from Canadian electro-acoustic label Ambiances Magnétiques) is such a rattlingly entertaining set which is so well conceived and organised, it comes over like a single piece of work rather than a sampler. The performers work predominantly in small groups; duos trios and soloists, but their use of cut’n’paste montage techniques combined with turntables, tapes and live electronics adds a whole world of dimensions to the proceedings. Amongst the stand out tracks is Martin Tétrault and Marc Tremblay’s fabulous Chronique du disque which opens with a blast of vinyl scratches that sounds like a thunderstorm then segues into a cheesy jazz vibes ensemble which is overtaken by a plunderphonics sequence that resembles the work of cartoon composer Carl Stalling. Elsewhere Jean Derome contributes 8 duo and trio’s (with Tétreault again and Joane Hétu) from a film project entitled Retour au Blanc. It sounds improvised with the players going at it with a variety of weapons including queasily manipulated orchestral music, fidgeting hand held objects. air emptying out of a balloon, groaning sax, manipulated percussion and a bit which sounds like the laser gun fight out of Forbidden Planet. René Lussier contributes impeccable solo guitar piece that (in my mind at least) recalls players like Fred Frith and Gary Lucas in it’s brightness of tone and attention to space and texture. There are so many other terrific moments (André Duchesne & Diesel playing fiddly, Henry Cow like fusion; Robert Lepage pitting his Clarinet against the electric scrapes and flutterings of The Impromptistes) that warrant attention that I’m ay a loss which to describe next. That alone is a singular achievement and one that makes this complation well worth your attention. 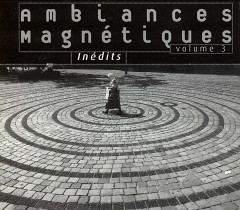 volume 3: Inédits
… well worth your attention.