Lussier is a hard man to pin down, active in all sorts of experimental areas, such as avant-rock, improv, studio tapework and contemporary chamber. Yet, his work is always more than the sum of these various ingredients. And, unlike the largely superficial, short-attention-span-eclectisism of the Japanese underground, René Lussier’s rampant polystylism reveals a shrewd awareness of compositional structure. He’s a lot like Heiner Goebbels in this respect. While the three commissions from 1990-92 ( Les mains moites, Art brut and Roche noire) which comprise Trois histoires undergo many, often rapid, transformations, he avoids a feeling of fragmentariness by careful use of motivic threack which loosely bind the disparate elements —Derome’s sparkling flute on the first piece, the romantic chamber strings on the second. Lussier’s light touch and unobtrusive humour mask the complexity of his textural juxtapositions, making this a thoroughly enjoyable collection. 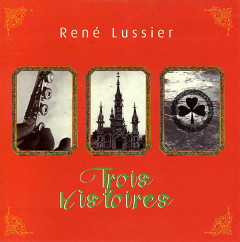