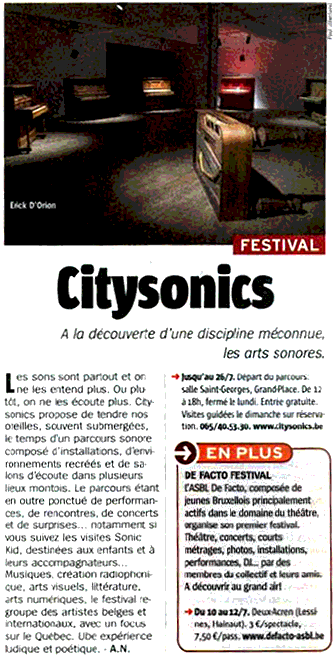 Québec artists run amok in an old Belgian town for a festival experimenting with sonics — from gunfire to spliced love songs.

It’s a rainy afternoon in the legal district of Mons, Belgium. Up ahead stands the city’s Court of Justice, a stern concrete keep topped by an eye-like cupola. Gunmen fire from narrow slits around the perimeter of the building. Helicopters circle above; their intense drone is ear-splitting.

No, Belgium has not turned into a police state. The dystopian soundscape — the gunfire and the helicopters — around the forbidding architecture was created by Québec artist Jocelyn Robert. His composition, part of a series entitled Invisible Cities, is designed to be heard on an MP3 player while following a set path through the winding cobblestone streets of Mons.

This Court of Justice part is hardcore to say the least. “I find it really violent, like a cry of pain,” says 19-year old local student Émilie Kalecinski. It is, she says, a little harsh, even if the building is “quite sombre and austere.”

Robert is one of six Québec artists who have descended upon the southern city of Mons for the launch of City Sonics, an experimental sound festival. This year’s event features a special focus on the sounds of Québec.

The previous day, the festival had opened with off-kilter cultural commentary from Montréal’s Pop Core Duo. Imagine an Alcoholics Anonymous meeting on board a cruise ship in the middle of a stormy night with a psychotic master of ceremonies, and you’re halfway there.

Manuel Chantre and Simon Laroche launch into their set with naval peaked caps, inviting the audience to smash a piñata to poppy electro sounds. But the festive mood changes abruptly as, blinking in the penumbra, Chantre strides out with a mike, asking the audience to share their tales of epiphany. Naturally, everyone freezes.

Fortunately, Chantre has come prepared with some ready-made confessions, one of which involves redemption while singing in the shower and another about a devout cripple who discovers she can walk without God.

Things get darker after that, as the duo navigate through stormy seas to the wails of crazed mermaids (a distorted sample of Daryl Hannah’s replicant in Bladerunner), with the set finally reaching a deafening, multi-layered crescendo. We wanted it to be a bit like a personal growth workshop, Laroche says afterward.

Surreal? Well, this is Belgium, home of surrealism, after all.

What to make, for example, of Erick d’Orion’s five pianos without pianists? Music from artists like Duke Ellington, Sun Ra and the Wu Tang Clan is piped through to vibrating motors installed in five dilapidated pianos. The deep, mechanical growls sound more like pneumatic drills than musical instruments.

Clutching a can of ubiquitous Belgian brew Jupiler, d’Orion looks like a death metal fan who has just emerged from the mosh pit. The piano installation is all about creating sounds from objects in unexpected ways, says the Québec City native. He did a similar thing before with salad bowls.

Ten minutes down the road at the Catholic University of Mons, fragments of How Deep Is Your Love by the Bee Gees are stretched into unrecognizably mystical form in the echoing confines of a 15th-century chapel. Maybe it’s just the surroundings, but standing alone beneath the stained-glass windows, Montréal artist Alexander MacSween cuts a vaguely monastic figure.

His installation, Chapel of Love, is based on split-second splices from love songs by artists as diverse as Axl Rose and Franz Schubert. “I asked people to send me love songs eight weeks ago,” he says. “Oddly enough, most of them sent me heartbreak songs.” He expresses a desire to do the same thing in the churches back home: “People don’t go there anymore, but nobody wants to take them down. They are areas for reflection.”

Upstairs, Simon Dumas is presenting a very personal take on the veracity of memory, based on his split with a girlfriend. Reconstructed photos — his ex now portrayed by a scantily clad actress — appear in dreamy slow motion interspersed with poetry and snatches of spoken word.

A specific instance of how memory distorts past realities comes up in the video. Dumas, an artist and poet based in Québec City, explains that the recollection of his former girlfriend’s stomach problems led him to remember a photo of her with her forearm on her belly, a false memory since it had actually been placed behind her back.

Next year, City Sonics’ organizers plan to up the Québec quotient. Overall, the first two days of this year’s festival have been a mind-altering experience. Gleefully anarchic, wilfully eccentric, with a good dollop of humour in places, it is perhaps one of Europe’s most original festivals — and this year, six guys from Québec have helped to make it happen. 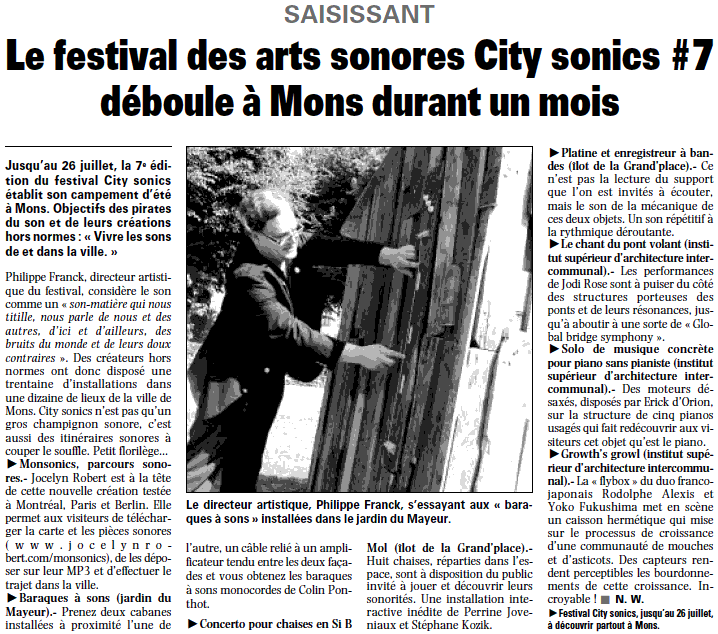