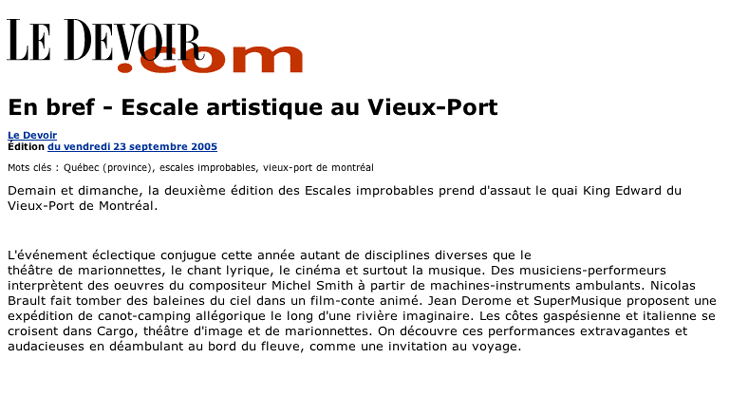 It’s the proverbial tale of two cities at the Guelph Jazz Festival this year. This modest but always visionary event, which begins its 12th season tomorrow, honours Chicago’s Association for the Advancement of Creative Musicians on the occasion of its 40th anniversary and acknowledges Montréal’s vibrant musique actuelle scene, now into its third decade.

The Americans, of course, will get most of the attention, culminating Saturday night when the lately reconstituted and still legendary Art Ensemble of Chicago performs at the River Run Centre. But the Québécois, with their up-to-the-moment mix-and-match of ideas from the jazz, rock, pop and classical avant-garde, should not be overlooked.

Some 50 Montréal musicians will have appeared in this Southwestern Ontario university town before the festival concludes on Sunday. One of their number, saxophonist and flutist Jean Derome, likens them collectively to “a tribe of Indians,” with the important qualification that “the chief changes all the time.”

It is, in other words, a highly collaborative and co-operative community. Derome estimates its representation in Guelph this year to be “more than half of what’s happening in Montréal,” where, he notes rather provocatively, “maybe there are even more groups than there are musicians.”

As that suggests, many of the players do double, triple and quadruple duty in each other’s bands.

Indeed, ask Derome about the number of groups to which he himself is a party, either as leader or band member. “Now, not too many,” he responds mildly, in a telephone interview from his home in Montréal’s Plateau neighbourhood. “The active ones — around 10 or 12. Less than usual.”

Derome, a stout yet soft-spoken fellow just turned 50, has been a pivotal figure in Montréal’s left-of-centre musical circles since the mid-1970s, predating the advent of musique actuelle as a catch-all category for the city’s funky, largely Francophone avant-garde. His activities, well documented on CD by the Ambiances Magnétiques label that he and others established in 1983, are remarkable for both the breadth of music and the amount of sheer hard work that they represent.

One of those aforementioned 10 or 12 bands of the moment is Évidence, whose raison d’être for more than 20 years has been the music of Thelonious Monk. The trio — Derome, bassist Pierre Cartier and drummer Pierre Tanguay — will appear on Friday at the Guelph Youth Music Centre.

Another is the Fanfare Pourpour, a street band that is scheduled on Saturday afternoon to lead a parade along Wyndham Street and then give a free concert of waltzes and other traditional European music at the festival’s Carden Street tent. There can be as many as 20 musicians in the Fanfare, which often performs in Montréal for social or political causes.

Derome calls it a “very beautiful, utopian group,” noting that it is run by two of its members, guitarist Luc Proulx and singer-accordionist Lou Babin, as if it were a family rather than a business. “They decided I was artistic director,” he admits rather uncomfortably, referring to the Fanfare’s otherwise wholly egalitarian membership. “I don’t know about that.”

A third band of those 10 or 12 is the Pierre Cartier -led sextet that will offer the bassist’s classically informed, jazz-song settings of several Québécois poems on Thursday night at Mitchell Hall. A fourth is guitarist Rainer Wiens’s sextet Follow Follow, whose African-derived rhythms will rock the Carden Street tent on Saturday afternoon. That’s an impressive range of musical idioms for one musician to embrace in just three days, and it still scarcely touches on Derome’s work in free improvisation as heard last ear at Guelph in the form of Nous perçons les oreilles (We Pierce Ears), a duo with his wife, the singer and saxophonist Joane Hétu.

So what makes Jean, um, blow?

He harks back to his earliest experience as a musician. “The first time you play music,” he suggests, “there’s something there that will always be your way of being a musician. The rest is just learning how to do it, how to say it, how to be more accurate each time you play. But even in the ’nest,’ everything is already there.”

And Derome’s “way” of being a musician? “First of all, I try to approach music with an open mind. I think that music can be many things. I try to be aware of different cultures, different eras, different styles — and not just as if they’re different clothes that you can wear. I’m always surprised to see that some musicians treat a style of music with disrespect, like a symphony musician who laughs at mariachi musicians, for example. You know, there’s something in the triplet ’swing’ that a mariachi band has that no symphony musician can play.”

Not to mention the triplet swing of Thelonious Monk — whose compositional trickery continues to tease and taunt even the wisest of jazz musicians. Derome, however, heard something quite basic when he first encountered the American pianist’s music. “It was really open; there was space for me to learn. It’s like Johann Sebastian Bach’s music: There’s something that’s… well, I wouldn’t say neutral… but there’s not so much dramatic ego — the way there is in [Charles] Mingus’s music. For a long time I felt you couldn’t play Mingus’s music if you were not Mingus, it was so personal.”

Rest assured, Derome knows his Bach and he knows his Mingus. Years ago, he studied the classics at the Conservatoire de musique du Québec à Montréal; lately, he has come to terms with Mingus as a member of the Normand Guilbeault Ensemble, which recently released its second CD devoted to the American bassist’s music.

“In Monk,” Derome continues, “the tunes are like puzzles. There’s always something. It’s like having a rock outside your house and each time you go by, you stub your toe on it; each time you arrive at bar seven, second beat, there’s a strange note. So you have to be very aware. It’s always very exciting to play and it doesn’t let you just show off your technique; you have to think about the pieces and find a specific feeling for each one.”

In the end, Monk, Bach, Mingus, waltzes, African grooves, free improvisation and mariachi music are all, in Derome’s eyes, simply “different facets of the same diamond.” Accordingly, it’s only right that he should add on his own behalf, “Sometimes maybe I’m a bit of a chameleon and I change, depending on the context. But I think, deeply inside, it’s always the same musician.”

“The first time you play music,” he suggests, “there’s something there that will always be your way of being a musician. The rest is just learning how to do it, how to say it, how to be more accurate each time you play. But even in the ’nest,’ everything is already there.” 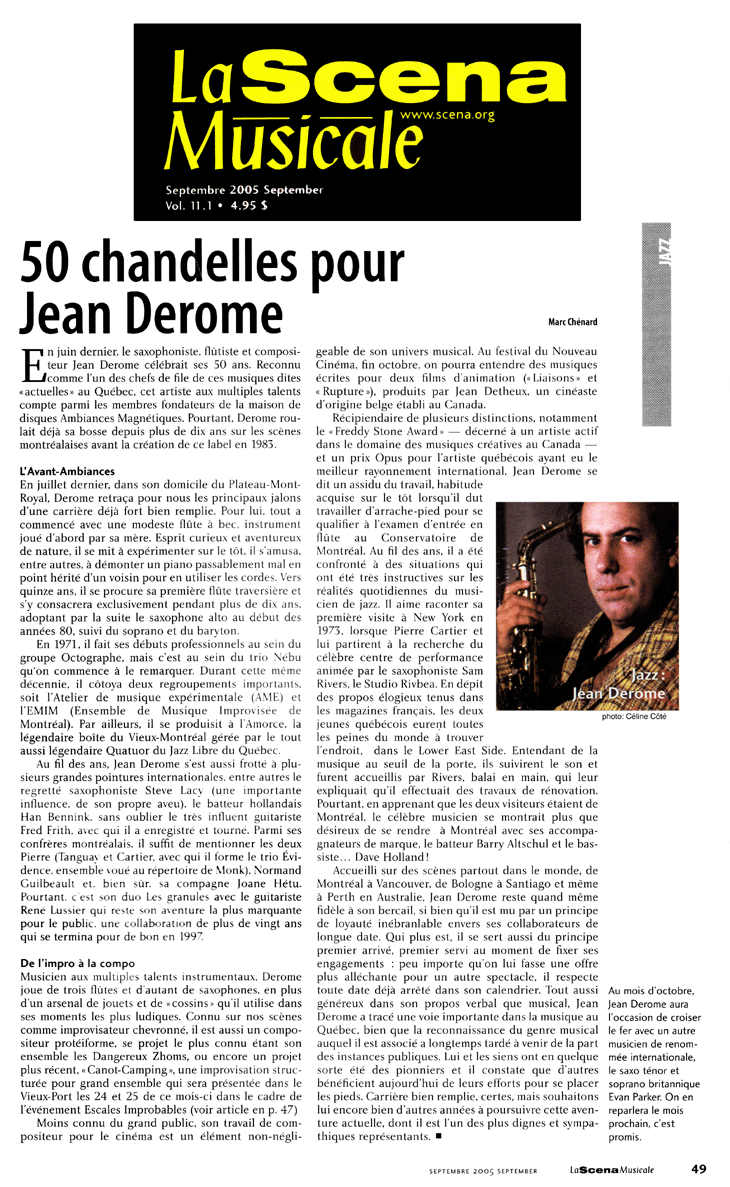 “We’re from Montréal”, Derome said. “This is the kind of music we do.” Not everywhere, he added dryly. “So you can visit.” At one point between numbers, the bar’s ice machine clattered—an aberration, the Firefly is very solicitous of performers. “The ice is nice”, Hétu commented, thinking I suspect about how it could be integrated into the music. The duo closed its set with a game of avant-garde patty-cake, beating hands together while singing a simple four-bar, nursery-song like phrase. That little melodic nugget stayed lodged in my ear during the break between shows.[…]

Avantjazz’s outer edge isn’t only razor sharp; it’s also broad enough to accommodate a range of artists who at once push the envelope of improvisatory music to glorious effect, but also, at times, test the patience of the casual listener’s attention span.[…]

And the fact that some of these performers are pretty far out there only adds merit to their accomplishments. That a vocalist squealing and grunting in French and slapping her torso in time to her accompanist’s caterwauls on various whistles can come across not only as listenable, but enjoyable and oddly soothing, is a tribute not only to the artists’ abilities but to the patience of an open-eared audience.[…]

Derome and Hétu performed for an hour, their unique sound occasionally living up to their performance moniker: “We Pierce the Ears.” Oddly, for as challenging as their sound was - and “challenging” isn’t a pejorative when it comes to Edgefest - the duo frequently found harmonic plateaus that, while frequently dissonant, had an unmistakable beauty.[…]

… “challenging” isn’t a pejorative when it comes to Edgefest — the duo frequently found harmonic plateaus that, while frequently dissonant, had an unmistakable beauty.