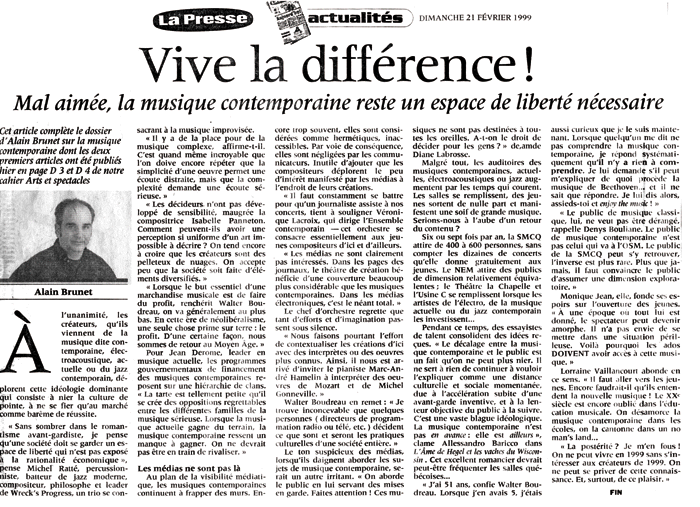 Derome’s duo album with Joane Hétu is also suffused with playful elements, especially Jonquille. In which a list of single words is recited to charming rhythmic effect. Mostly however the duo explores abstract improv. Hétu’s wordless vocals (and occasional,alto sax) rising expressively against Derome’s alto sax and numerous small wind instruments. Use of the latter lends the improvising a refreshing anti-virtuosic feel, where technical polish is abandoned for a more rough and ready celebration of unusual sound creation. L’étrier typifies the physical thrill of extreme sounds in extraordinary juxtapositions. Fans of Phil Minton and Doger Turner’s duo will welcome this equally adventurous Canadian pair with wide open minds.

… a more rough and ready celebration of unusual sound creation.

If authenticity is your main attraction to revivalist music, Jean Derome and company should be right up your alley. On this stunning 43-track CD, Derome leads the way through two compositions that are subdivided into smaller pieces. The first 26 tracks, recorded in 1994, pay homage to the Oulipian Georges Pérec. In a true Oulipian approach, Derome produces tightly-wound tracks that are strict in arrangement yet mathematically complex, ranging in style from sultry jazz to circus music to mod-sounding surf music. There are even a few sprinklings of Monk emanating from some of the tunes, and the disc will be easily accessible to swing-band fans yet still eccentric enough to entice those searching for musical peculiarity. The second half of the CD, entitled Tu r’luttes, shows the more improvisational side of Derome and crew, as a chaotic, free jazz strain runs through the tracks. Think Zorn’s extremism without his aural ferocity. With many of your favourite Ambiances Magnetiques artists in tow, including Pierre Tanguay, René Lussier and Frank Lozano, Derome proves his amazing compositional ability while showcasing the outrageously overlooked Canadian talent that’s available. We’ve said it before, but if you haven’t checked out the Canadian experimental scene, you’re missing out on some awesome musical energy.

… tightly-wound tracks that are strict in arrangement yet mathematically complex, ranging in style from sultry jazz to circus music to mod-sounding surf music.