The work of clarinetist Xavier Charles ranges from noise to electroacoustic via sound poetry. He has played in numerous new music fesivals in France and abroad. Charles collaborates with both Jacques Di Donato and Frederic Le Junter. In his work with groups and collectives, he has also collaborated with Martin Tétreault, The Ex, Peirre Berthet, Étage 34, Axel Dörner, Jérôme Jeanmart, John Butcher, Jean Pallandre, Marc Pichelin, Chris Cutler, Martine Altenburger, Camel Zékri, Emmanuelle Pellegrini, Michel Donédaand Frédéric Blondy. The artist has composed for the theatre, most notably with Compagnie François Lazaro. Currently his musical research ranges from performance on the clarinet and bass to the installation of vibrating speakers, at the edge of improvised music, noisy rock and electroacoustic sound. He’s deeply involved in the music world as an organizer of the fesival Densités. 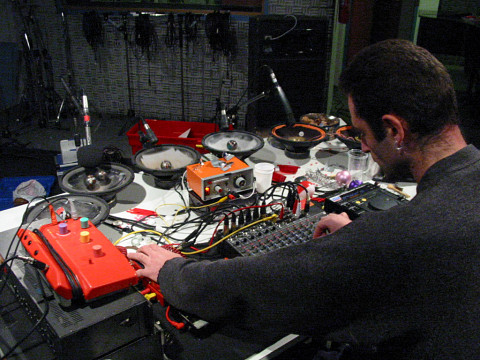 On 14 December 2000 in Montréal, turntablist Martin Tétreault and percussionist Pierre Tanguay recorded an offbeat but affectionate homage to the history of jazz in the form of ten three-minute pieces, one for each decade of Uhe 20th century. Three days later Tétreault mailed a DAT of the session to French improvising clarinettist Xavier Charles, who added his own contributions on 29 December before mixing down and pressing the result in a ridiculously limited CD-R edition two days later. The trio can indeed claim to have made the last jazz record of the 20th century.

In today’s Improv, whose practitioners scowl joylessly at laptops and inputless mixing boards, it’s a pleasant surprise to come across the same sense of humour that once characterised Lol Coxhill’s and Steve Beresford’s work on the Nato label. Recorded in mono, the first four tracks are followed by a Pythonesque “and now - stereo!" flourish. Though conceptually rigorous, this is no mere exercise in cheap pastiche. Charles’s quotations of Sidney Bechet are as affectionate as they are accomplished, but he makes no attempt to ape the beboppers. Instead he sticks to sustained grainy multiphonics swinging between the left and right channels, leaving Tétreault’s mangled Hammond organ samples and Tanguay’s manic drumming to reference 50s hard bop.

In La Pièce (“The room”), Carole Rieussec and Jean-Christophe Camps (aka the electroacoustic duo Kristoff K.Roll) took a different direction. Leaving the studio behind, they devised an elaborate set-up allowing them to perform live what most tape music composers do in the studio. Equipped with a sound diffusion system, electronics and instruments they are able to perform music on sounding objects, transform sounds in real time, and play back pre-recorded material. Xavier Charles’ clarinet makes one with the set-up. As an improviser, his discourse fuels the K.Rolls, but he also has control over his sound by playing in a number of microphones, all with different diffusion settings and altered by different electronics. Thus we have in La Pièce Charles’ “true” playing (also miked), the alteration and spacialization of his music through the microphones, the possible alteration of his music by the K.Rolls, the K.Rolls’ prepared material and their live electronics. Sound cluttered? It is not, on the contrary. The music breathes, limited to delicate gestures. Charles’ was already far into the process of stripping down his playing. He focuses on multiphonics and drones, much like what he would do with John Butcher and Axel Dörner for The Contest of Pleasures. The sound poetry of the electroacousticians balances out the aridity of the clarinet to create something challenging but very much absorbing. The K.Rolls would develop something similar for Le petit bruit d’à-côté du cœur du monde with saxophonist Daunik Lazro.