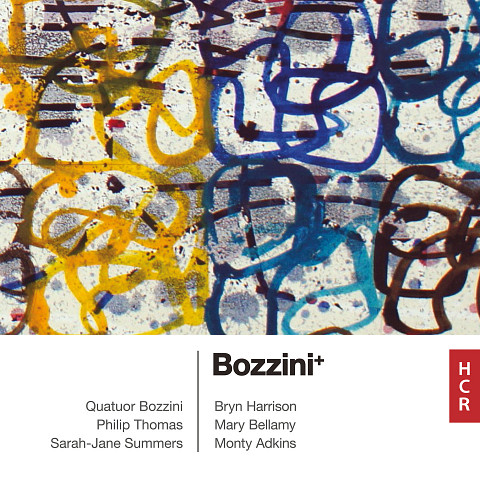 This item is not available through our web site. We have catalogued it for information purposes only. You might find more details about this item on the Huddersfield Contemporary Records website. 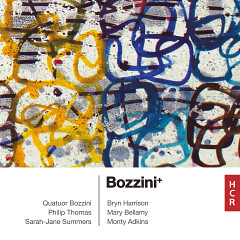 The Bozzini+ project began in 2016, bringing together Montréal’s Quatuor Bozzini, the Norway-based Scottish fiddler Sarah-Jane Summers, and four staff members of the Centre for Research in New Music (CeReNeM) at the University of Huddersfield: pianist Philip Thomas and composers Monty Adkins, Mary Bellamy, and Bryn Harrison. The project has included collaborative development residencies, workshops, performances, and recordings scattered between Huddersfield, Canada, Scotland, and Norway, all supported through a generous grant to CeReNeM from Huddersfield’s University Research Fund.

The Bozzinis are certainly no strangers to Huddersfield. They have been a regular presence at hcmf// since 2002, including extended residencies in 2011—14 for their Composer’s Kitchen programme for emerging composers. Friendships and collaborations between members of the quartet and members of University staff go back to the mid-1990s, and the quartet has also championed the work of several CeReNeM PhD students.

The quartet is of course the most obvious common thread through the three works presented on these recordings, but it isn’t the only connection. The composers represented here have very different aesthetic concerns and working methods, but there are important links underlying the surface-level differences. The most notable of these is the approach to time and, in particular, an interest in elongated, suspended, and immersive forms. One has a sense of being enmeshed, submerged, surrounded—these are works that somehow fill their space, that occupy their time rather than narrating and navigating a path through that time, or at least they navigate a path that is more labyrinth than map. Each composer arrives at this state in different ways: Harrison through rapid, filigree cycles, not-quite-repeating loops that are always familiar but never the same, latticework grids crisscrossed with glissandi that are always on their way somewhere but never arrive; Bellamy through high, untethered, gossamer whistles, flickers, wisps, and slides, with a constant vibrating energy that—occasionally and unpredictably—freezes, suspends, grinds into brittle noise, or loops back on itself before ascending again into the ‘ocean of air’ of its title; and Adkins through stretching and pulling, with a constant sense of the horizontal, of long, extended lines that dissolve slowly into other lines, of steady, fluid pulses and waves, of sustained drones, and indeed through folk-infused tunes that are evocative of other places and other times.

Another thread here is harmony. In Adkins’ case this is driven largely by the tuning of the sympathetic strings of the Hardanger fiddle. Though the tuning of these strings is fixed and static, their resonance isn’t — the resonance responds to the energy of overtones of the bowed strings above, creating ghostly secondary vibrations, which here are replicated in the spectral drones of the electronic part. And although the soundworld is quite different, there is a similar magnetic tension between moving lines and static resonance in Mary Bellamy’s work, emerging principally from the prevalence of natural harmonics in the strings, frequently as the unpredictable results of changes in finger pressure during rapid, high glissandi and from unstable changes in bow pressure and bow position, which combine to create a sound that hovers between pitch and noise. These instabilities are set against unexpected anchors of clear, sustained pitches that briefly hint at a palimpsestic pitch structure, not least through the sustained B-flat from an EBow inside of the piano near the end of the piece. Finally, harmony is crucial in Bryn Harrison’s Piano Quintet, where there is again a fascinating tension between movement and stasis with regard to pitch, with various spinning cycles of chromatic scales, overlapping and interlocked in the ‘points’ of the piano and interconnected by the ‘lines’ of the quartet’s glissandi, a relationship that is most apparent in the work’s beguiling, 15-minute-long Coda. As in much of Harrison’s music, the work’s chromaticism is responsible both for the constant sense of forward momentum and also the looping spirals that confound that momentum.

The final connecting thread is more conceptual but is really at the heart of the project: it’s in part about collaboration, and in particular about the special kinds of creative risks that become possible when we’re collaborating with friends; and it’s in part about the nature of ‘research’ in artistic settings, in which exploration and adventure are often more about personal, expressive vulnerability and creative risk-taking than about the mechanisms, processes, or techniques that are more easily documented and explained. In all three of these pieces, their composers have explored spaces, approaches, ideas, and questions that were completely new to their work, and I can’t help but think that this is partly the result of the trust present between colleagues who are also friends. It is, I suppose, the ‘plus’ of the project’s title. That plus isn’t just an ‘and’ — it’s also a ‘what if…’, a ‘could we try…’, a ‘sorry, that didn’t quite work, but what about…’. Philip Thomas puts it this way:

‘The music was borne out of a common environment of mutual respect and discovery, rigour and commitment. Each piece bears in some way the trace of an extended and complex network of relationships, of conversations, rehearsal, revisions, personal and collective reflection and investigation — what Clarke, Doffman and Lim have previously termed a “complex creative ecosystem”. The results as heard on these recordings are in this sense only the most tangible ‘product’ of this ecosystem. The imprint upon all our work as performers and composers goes deeper, enriching the experience and understanding of our artistic practice moving forward’.

The ‘plus’ started off as augmentation — Philip as pianist, Sarah-Jane as fiddler, the addition of electronics—but became something else. The ‘plus’ became risk, proposition, newness… the art that becomes possible through coming together.

A project begun in 2016, under the auspices of the Centre for Research in New Music at Huddersfield University, brought together the Montréal-based Bozzini Quartet, the Scottish hardanger fiddler Sarah-Jane Summers, and Huddersfield artists pianist Philip Thomas, and composers Bryn Harrison, Mary Bellamy, and Monty Adkins. Some of the resulting music is heard on Bozzini+, a double-CD featuring an extended work by each of the participating composers. Bryn Harrison’s Piano Quintet revels in juxtaposing irregularly repeating piano filigrees with whorls of glissandos from the quartet. Bellamy’s beneath an ocean of air crafts high-lying, tenuous sounds interrupted by occasional submersive thrusts. Still Juniper Snow, by Adkins, emphasizes sustain, with long drones held against folk-inspired melodies, creating a slow paced, sumptuous surface.