Very impressive, super-solidly played by the Bozzini plus one — a heady outing. — The Squid’s Ear, USA

Organizational structures hide the phenomena on which they are built. For example, spoken language requires both a certain perception of fundamental elements (phonemes), and a state of transcendence that enables us to forget these very elements. Similarly, in the aural sphere, music is the negation of sound for the benefit of its organization. Nevertheless, a sound that is completely left to its autonomous state (as opposed to it being collected for its potential as a poetic tool) goes back to the hum of nature. Thus, in order for it to be aesthetically perceivable, sound needs nature as much as music needs sound. Musique d’art pour quintette à cordes articulates this dialectical tension between sound and music; seeking balance.

The profiled Quatuor Bozzini started in 1999 and interested mainly on contemporary music. They make their own decisions in choosing and producing their programs, never taking the easy way. Over the years they built up the impressive experience and premiered hundreds of compositions. About 20 CDs appeared filled with works by John Cage, Phill Niblock, James Tenney, Gyula Csapó, etc., etc. This time they concentrate on a composer from their homeland Canada, Simon Martin. Martin is a composer and producer of contemporary concert music, operating in the footsteps of Harry Partch, La Monte Young and James Tenney, implying a focus on natural intonation. With Musique d’art they set their teeth in an hour-long, five-movement composition for string quintet. Besides the Bozzini sisters and Allisa Cheung and Clemens Merkel, they are joined here by Pierre-Alexandre Maranda playing the double bass. Earlier Quator Bozzini performed work by Martin: Icebergs et Soleil de minuit — Quatuor en blanc (2007). But Musique d’Art is a welcome next step. The work is built from extended dissonant and abrasive sound entities, moving on like a massive tectonic plate, with a very differentiated sound spectrum at a micro level. In the second part there occur some dramatic changes where the music changes into harsh and noisy sections. Overall with this composition Martin offers an intriguing exercise in combining noise and music, that reminded me at moments of the work of Rumanian composer Iancu Dumitrescu. Playing with timbre and pitch the music deeply resonates, and is very expressive and emotional in its own way. In a great performance by Quator Bozzini and Maranda!

Playing with timbre and pitch the music deeply resonates, and is very expressive and emotional in its own way. In a great performance by Quator Bozzini and Maranda!
A kind of stable mystery, Musique d’art can only grow in significance. 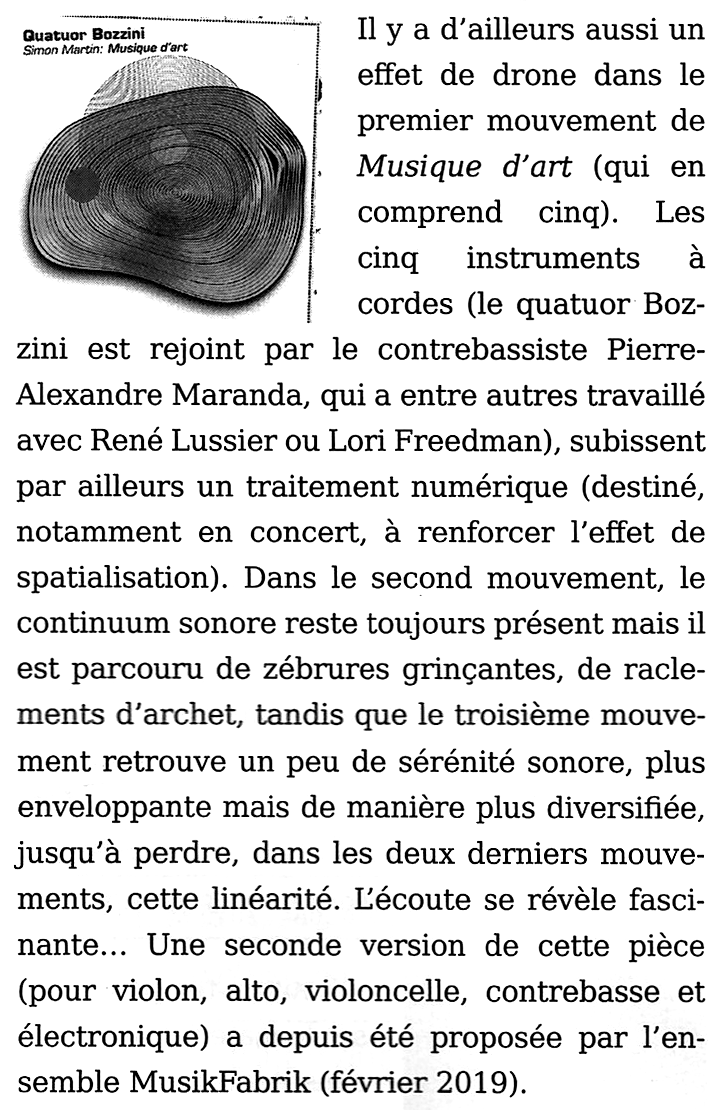 For Musique d’art, a five-movement, hour-long work for string quintet by Martin (b. 1981), the quartet — which in addition to the Bozzini sisters includes violinists Alissa Cheung and Clemens Merkel — is joined by double bassist Pierre-Alexandre Maranda. Like Niblock’s two pieces, Musique d’art is centered on the development elongated chords, but with more variability of density, dynamics and rates of harmonic change. Pitches drop out and fade in; discordant tones come and go as the intervals between notes widen and narrow; bow articulations shift to introduce changes to timbre and to add complexity to the stacked overtones. Not all of this is about pitch relationships: while at times the quintet sounds like a robust, tuned and detuned tamboura, at other times their collective sound dissolves into harsh, grey noise and rough, unpitched textures. Martin set out to create a fecund dialectic of sound and music with the piece, and in that he has succeeded.

Founded by the Bozzini sisters, cellist Isabelle and violinist Stéphanie, the eponymous Montréal-based string quartet has been a significant presence in Canadian new music since the early 2000s. The Bozzini’s two CDs, one each of works by US composer Phill Niblock and Québec’s Simon Martin, are the latest additions to a substantial catalogue of recordings of sound — and concept-based contemporary music.

Baobab presents two large-scale works by Niblock (b. 1933). Both pieces — Baobab, originally composed in 2011, and Disseminate, composed in 1998 — were first written for orchestra and appear here as revised in 2017. By means of multi-track layering, they’ve been rearranged for string quartet multiplied times five. Both pieces are quintessential Niblock — thickly textured swarms of drones made up of microtones and moving timbres. Sustaining the requisite long tones undoubtedly is a challenge to the players’ physical stamina, but the sounds never falter.

Martin set out to create a fecund dialectic of sound and music with the piece, and in that he has succeeded. (cqb_1922). […] Both pieces are quintessential Niblock — thickly textured swarms of drones made up of microtones and moving timbres. Sustaining the requisite long tones undoubtedly is a challenge to the players’ physical stamina, but the sounds never falter. (cqb_1924)