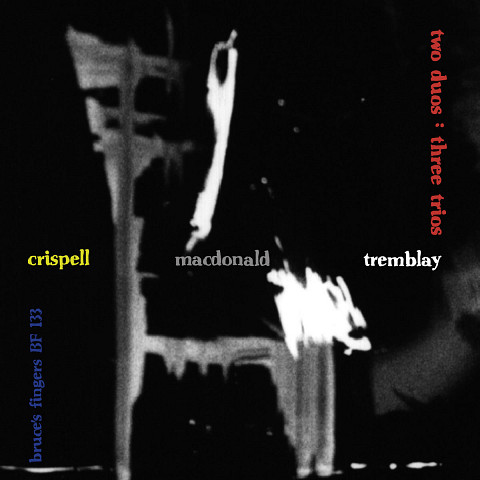 This item can be downloaded and/or listened to at brucesfingers.bandcamp.com. 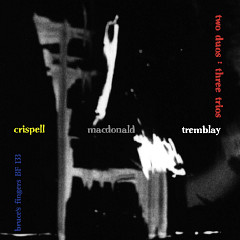 The daring American pianist Marilyn Crispell’s free jazz adventures have more than once been compared to volcanic activity. Here, Crispell joins the Scottish saxophonist Raymond MacDonald and the French-Canadian bassist and electronic adventurer Pierre Alexandre Tremblay. The project’s tectonic aspects alternate with moments so peaceful that they sometimes verge on the soporific—but not for long. That is particularly true in the beginning moments of Duo#1. It opens with percussive slaps followed by vague sounds that may be either from Tremblay’s bass or his digital equipment. Soon, MacDonald appears on soprano saxophone. He and Crispell are off on the first of the album’s duets, her sensitive keyboard touch ameliorating and occasionally abetting, his chattering exclamations. Duo#2 finds Crispell and MacDonald in deep musical conversation that incorporates spontaneous mutual phrasing reflecting not only creative compatibility but also uncanny conjunctions of rhythmic like-thinking.

The opening of Trio#1 is electronic, a bit ominous. A couple of minutes in, Crispell’s delicate, sporadic piano interjections begin mingling with Tremblay’s digital sounds as MacDonald’s tenor saxophone rumbles softly, then not so softly, then insistently. Before the track ends, the tenor melds into ruminations accompanied by wind chimes or their electronic equivalent. Through Trio#2, bowed bass and percussion dominate. The music is quiet and at the same time active. Trio#3 ends the album in an atmosphere heavy with portent that evaporates as the music slowly fades away. The listener—this one, in any case—is bewitched and puzzled, and listens again from the top.