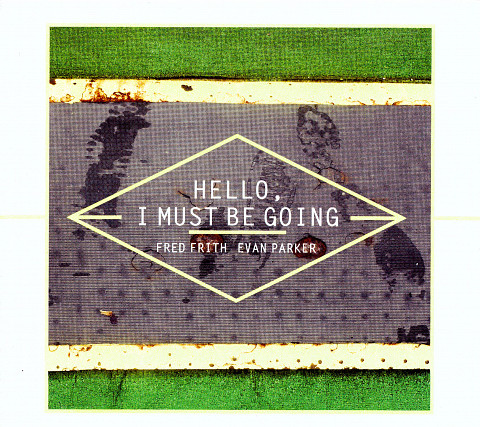 By keeping this music with you day in, day out, the absorption of its messages will be facilitated… — The Squid’s Ear, USA 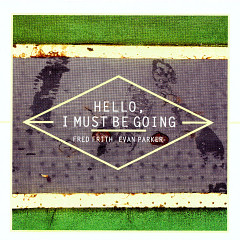 Hello, I Must Be Going

Both this album’s title and the photos adorning its internal cover seem to hint at the necessity of finding a way to overcome impediments of any kind, thus avoiding the interruption of an essential flux. As old masters of the improvisational game, Fred Frith and Evan Parker know this need very well. Although this performance, captured at the 2014 edition of the Victoriaville Festival, doesn’t really seem to break new ground — never a given in the short span of a single evening — it still emphasizes the unique characteristics of artists whose reputation has deservedly grown over the decades.

Each of the four tracks features what’s expected from the pair’s live embodiment. Frith’s resonant palette is as always efficient; he conjures up all kinds of dynamics and shades by rubbing, hitting, plucking, bowing and para-diddling long-suffering strings, a veritable multitude of objects and techniques at the service of the overall vibe. Especially notable are the expert use of the volume pedal, and the massive subsonic reverberations providing the meat in a couple of wicked crescendos. Parker adapts effortlessly to the electric environment, interacting with typical intelligence. In this context, his phraseology privileges the gradual modification of reiterating fragments and the employment of fluctuating snippets of (unsingable) melody. The soul-wrenching raucous spirals defining the reedist’s most stringent explorations of the self are only glimpsed, in favor of a somewhat improved contrapuntal intelligibility. Several moments of quiet contemplation and a few touches of dry humor (one of them causing Frith to laugh loudly during a section of Red Thread) enhance the partnership’s creative values.

The note left by Hello, I Must Be Going reads like an invitation to keep the mind focused and the body trained. Not every day one wakes up ready to fight, or just willing to patiently translate quotidian nonsense into significance. But through constant discipline and the capacity of remaining “open” to the streams and interferences that inform the instants of existence, a method will be instinctively developed to identify stimulating accents and momentous flashes. Small steps of evolution can occur even in the ambit of something that, on a first attempt, does not appear to elicit fundamental questions. By keeping this music with you day in, day out, the absorption of its messages will be facilitated, without the urgency of a lookout for groundbreaking gestures.

By keeping this music with you day in, day out, the absorption of its messages will be facilitated…

As the Guelph Jazz Festival (GJF) settles into maturity, dependable musical choices and the vagaries of touring means that a few of the performers at this year’s bash, September 16 to 20, are featured at more than one ensemble. The happy end result is that the audience gets to sample some musicians’ skills in more than one challenging setting. (…)

While the majority of these GJF improvisers who often work together are young, a constantly innovative stylist like British saxophonist Evan Parker, 71, continues to operate as he has for the past half century: partnering with as many musicians as possible. His September 17 HH performance is with baritone saxophonist Colin Stetson, while he hosts trumpeter Peter Evans and electronics exponents Ikue Mori and Sam Pluta September 19 at the GLT.

Suggesting how he will play during both concerts is Hello, I Must Be Going (Victo cd 128). Another Canadian live concert, from last year’s Festival International de Musique Actuelle de Victoriaville, it’s a duo session, this time with guitarist Fred Frith, 66. Frith’s command of the electric guitar is such though that he adroitly presages some of the electronic patterns Mori and Pluta may come up with, as well as being fully conversant with his instrument’s rhythmic and melodic tasks. Notably, when both players are in full improvisational flight, searching for novel timbres, it’s only Frith’s powerful strums that confirm that a guitar is being used. Otherwise he comes across like an actor inhabiting multiple roles in a one-man play. For instance processed drones and clicks meet the saxophonist’s flutter tongued slurs on the title track, while Frith’s resonating contributions to Particulars come from what sounds like a mutant grafting of strings onto a combination of tabla and conga drum. On the concluding Je me souviens unbridled sonic elation is attained, as Parker’s chortling pitch variations turn straight ahead as Frith responds with abbreviated spurts of rhythm through concentrated string pumping. Red Thread is the paramount instance of the duo’s work however. As Parker’s crimped reed quacks accelerates to a protracted allotment of circular breathing, Frith mirrors the reed lines with electronically processed modular flanges as well as supplying a connective bass line. The climax has the saxophonist exchanging tone eviscerating for luminous tone vibrations as the guitarist complements Parker’s new narrative with rugged yet reassuring rubber-band-like twangs. (…)

Red Thread is the paramount instance of the duo’s work

Although Fred Frith and Evan Parker are both British and come from around the same scene/generation of Europe’s finest free improvisers, this set was only the their third duo performance. Both of these men are master improvisers and this disc/set captures them at their best. He are is excerpt from my review of the concert, “Evan played mostly soprano sax and Fred often had his guitar on his lap with a table filled with objects: an e-bow, chopsticks, an ashtray, paintbrush, etc. Each of these men have their own vocabulary of sounds so they took their time to work their way through a variety of sounds and textures. It helps to actually see what Mr. Frith is doing since he has so many odd/unique ways to play his guitar. At one point, Fred repeatedly tapped on his strings, using his fingers and/or a chopstick shoved between the strings on the neck. The effect was most hypnotic with Evan also playing circular lines, both men weaving their strands together. As Fred would alter his approach to his guitar being held in his hands or on his lap. Evan, who is one of the masters of circular breathing, would also alter his sound to bring the two closer together into a similar exploratory zone. As the set progressed, the exchange got quicker and closer as if they were finishing each other’s sentences. This was one of those magical sets where everything works just right, the blend of ideas seamless.

This was one of those magical sets where everything works just right, the blend of ideas seamless.