MacSween & co. really trigger the imagination as they bob and weave and lock in to intense vamps, and the loose, unsettling moments only add colour to a vivid picture. — Cult#Mtl, Québec

From the album liner notes:

Soon after beginning work on this record I experienced a stifling creative block characterised not by an absence of inspiration but by an excess of ideas as to what it could be. Seeking a strategy to overcome this I asked Fabrizio Gilardino, co-owner of this label and designer of its album covers, to design a cover in advance of the music. I proposed this would be done complete with titles and durations for each piece, invented by Fabrizio, as well as credits for guest musicians of his own choosing. My task would then be to create the music that fit within these parameters. Fabrizio obliged enthusiastically and a few months later I received a draft of a blue and gold cover for a record called Dust that contained thirteen tracks with very inventive titles.

Although the plan worked well initially, I soon began to feel constrained, particularly by the titles and durations of the pieces, which seemed more and more in conflict with the music that was emerging. I persevered but soon realised it was pointless to let the music be compromised by a set of rules that were meant to inspire it.

At this time I was reading about the English psychoanalyst, Donald Winnicott, who played a game with his child patients in which he would draw a squiggle on a piece of paper then ask the children to continue the drawing. He called this ‘the squiggle game’. Reading this, it occurred to me that Fabrizio’s album cover and the included information, rather than functioning as a kind of musical colouring book, could be treated as a set of squiggles on which I could elaborate more freely.

Neither the original graphics nor any of the original titles remain, although many of the durations are quite close to the originals. The only thing unchanged from the original cover is the inclusion of the three exceptional musicians whose contribution to this record is, more than anything, what made it what it is. Corinne, Nicolas and Sam, merci, merci, merci. 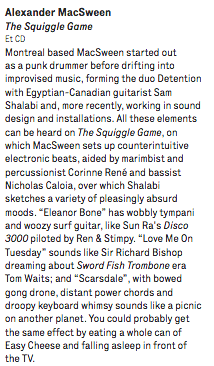 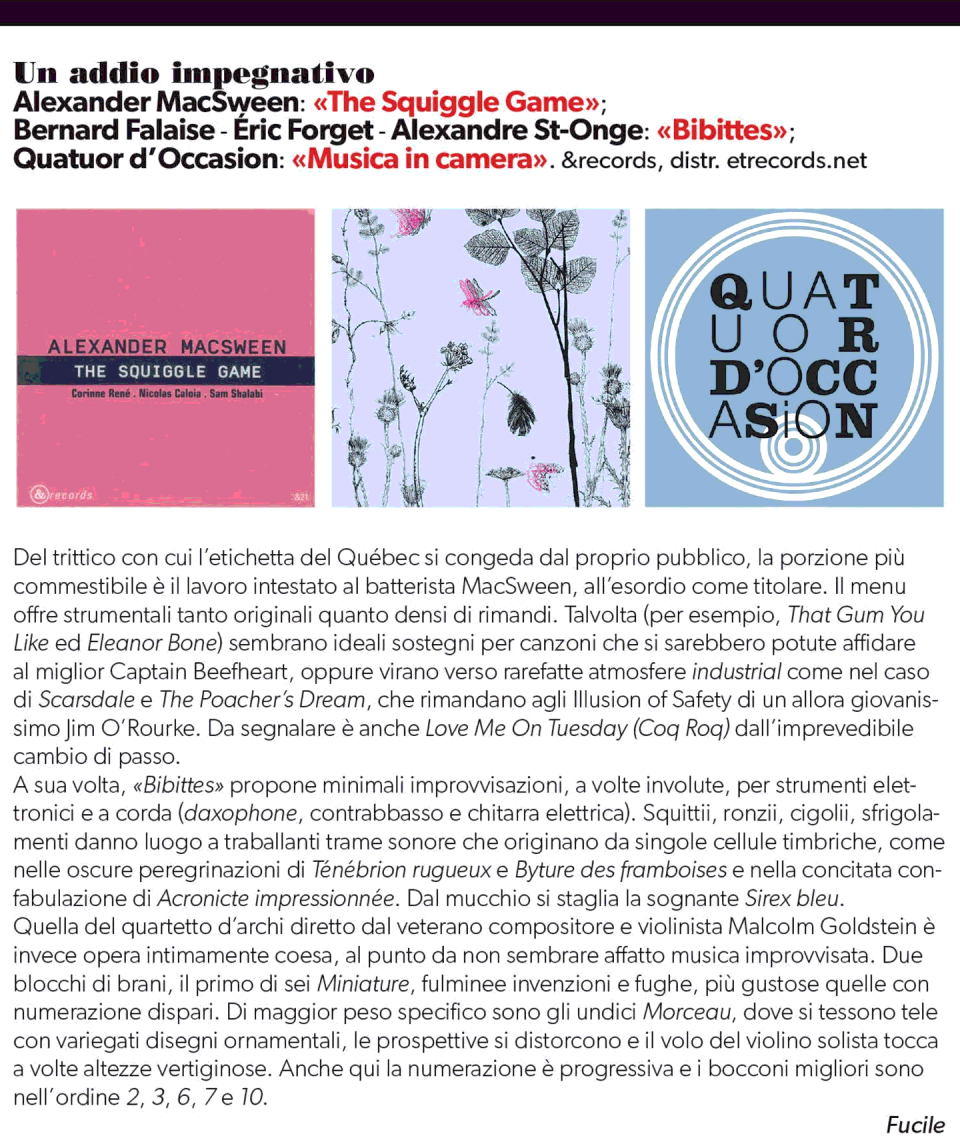 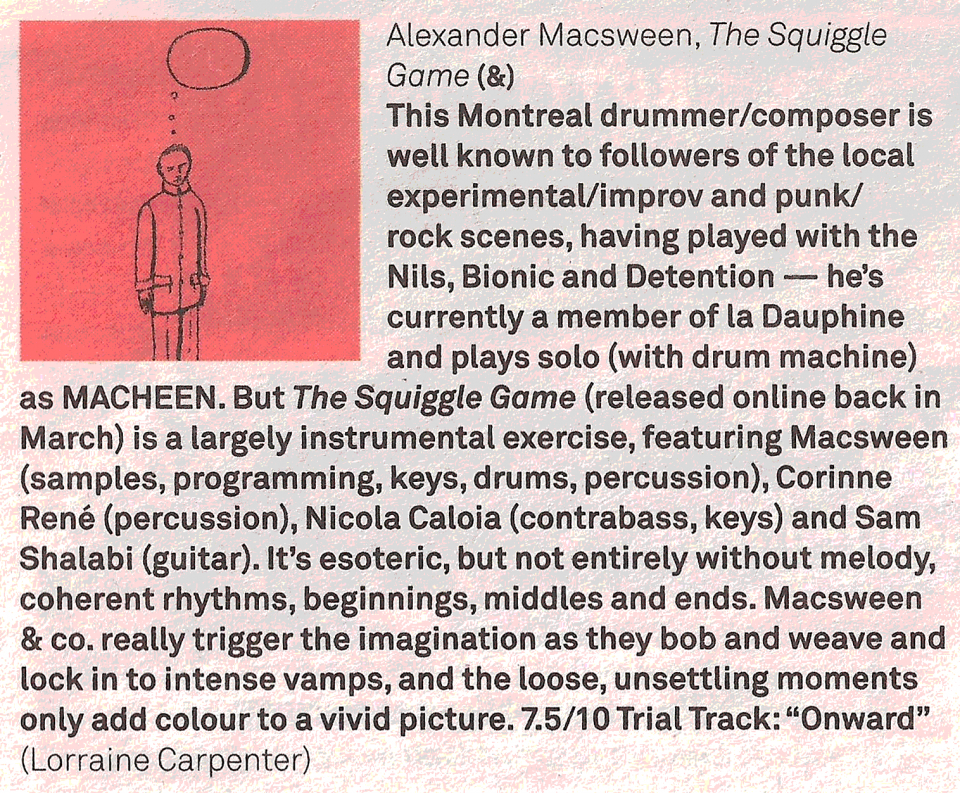 This Montréal drummer/composer is well known to followers of the local experimental/improvv and punk/rock scenes, having played with the Nils, Bionic and Detention — he’s currently a member of La Dauphine and plays solo (with drum machine) as MACHEEN. But The Squiggle Game (released online back in March) is a largely instrumental exercise, featuring MacSween (samples, programming, keys, drums, percussion), Corinne René (percussion), Nicolas Caloia (contrabass, keys) and Sam Shalabi (guitar). It’s esoteric, but not entirely without melody, coherent rhythms, beginnings, middles and ends. MacSween & co. really trigger the imagination as they bob and weave and lock in to intense vamps, and the loose, unsettling moments only add colour to a vivid picture. (7.5 / 10)

MacSween & co. really trigger the imagination as they bob and weave and lock in to intense vamps, and the loose, unsettling moments only add colour to a vivid picture.

The Squiggle Game is that rarest of beasts, the free-improv disc you can air-drum along to. Its absorbing rhythmic heft, especially on tracks like the lead-off That Gum You Like, is unsurprising when you realize that it’s the brainchild of a drummer. Alexander MacSween has been a part of the Montreal music underground since the late 1970s, working on every shade of the spectrum between rock and jazz: with punk and indie icons such as The Nils, Pest 5000, and Bionic; numerous improvised music collaborations, such as Detention, his ongoing duo with guitarist Sam Shalabi, founded in 1998; as well as music for dance, theatre, film, and multimedia pieces. The Squiggle Game is an anti-concept album, in which MacSween aimed to overcome a writers’ block consisting of a surplus (rather than deficit) of ideas. He asked &records co-owner Fabrizio Gilardino to design an album cover in advance, including titles, durations, and even guest musicians. The plan initially worked well to help the artist overcome his block, but soon he felt creatively constrained by the parameters and began colouring outside the lines, so to speak. He’d just read English psychoanalyst Donald Winnicott’s description of “the squiggle game,” created for his child patients, in which he would doodle on a piece of paper and get the children to continue the drawing. MacSween’s pieces indeed have a childlike sense of playfulness, squiggling across the border between composition and improvisation. MacSween, who commands the drum set, marimba, keyboards, and rhythm programming, is joined by frequent collaborator Shalabi on electric and nylon-string guitar, as well as Ratchet Orchestra bassist Nicolas Caloia (who also adds some Korg synth action), and the revelatory playing of percussionist Corinne René, who fills in much of the tonal space between the other players, turning aural doodles into sonic paintings.

The Squiggle Game is that rarest of beasts, the free-improv disc you can air-drum along to.

Although Alexander MacSween has been making music for thirty years, this is first release under his own name. He was a drummer for Jerry Jerry & The Sons Of Rhythm Orchestra, The Nils, Tinker, Blinker The Star, Pest 5000 and Bionic, but also ventured into improvisation with Sam Shalabi (as Detention) and he’s part of Martin Tetreault’s Turntable Quartet. Solo he sometimes works as Macheen with a drum machine and effect pedals. He is a man of many talents, which comes to great use when recording his own album. He plays here rhythm programming, sampler, tom toms, keyboards, voice, drums and marimba and along there is input from Corinne René on marimba, wood blocks, drum set, tympani, bowed gong, cymbal, percussion, bowed vibraphone, Nicolas Caloia on contrabass and univox MaxiKorg and Shalabi on guitar and nylon string guitar. They play on several of the pieces but not always and not all the time. This is indeed a highly varied album of some excellent music that easily moves around the circles of free jazz, jazz, improvisation, electronics, abstract sound scapes and these circles sometimes bump into each other, and sometimes stay wide apart. There is a fine choice of sampled voices, scattered around sparsely in these pieces. There are fine crafted rock rhythms, and Shalabi’s guitar spins, bows, moves around like he’s trying to kill the damn thing. Sometimes it seems that MacSween wants to play a more or less conventional rock song with some weirdo elements, and then there’s something like White Bear and Under The Plum Tree, with all its abstract electronics and sound scaping and the latter with a soaring cello. Crocodiles with some fine voice samples has a nice film noir ring to it. This is a highly varied record, which goes from strong song to another song. Anyone with an open mind should seek this out.

This is a highly varied record, which goes from strong song to another song. Anyone with an open mind should seek this out.

The Squiggle Game (& Records) is a true oddity from the hands and brain of the Canadian percussionist Alexander MacSween. We’ve rarely been privileged to hear such idiosyncratic and unusual approaches to the construction of instrumental music, and the results are quite thrilling with their unexpected byways, forays and sojourns in unfamiliar turfs. As an additional benefit, the instrumentation is odd, sparsely arranged, and performed with an interesting and quite modest restraint. On top of all that there’s MacSween curious vocal interjections and sparing use of the sampler insinuating themselves into the gaps. How did such a quaint item get made?

The answer may lie with MacSween’s own process, or rather the lack of it. Blighted by a creative block when faced with making this record, he tried to trick his brain into lifting itself out of the quagmire. “Do me a drawing,” he proposed to Fabrizio Gilardino who co-runs the label, “and I’ll make an album around your image. Matter of fact, do the titles while you’re at it. And write the credits for the whole thing, using the names of whatever musicians you think I should play with.” “Are you nuts?!” sputtered Fabrizio, nearly choking on his own panini.

Undeterred, MacSween received a completed package of art and credits. All he had to do now was fill it up with some music. At this point he realised that building a record back-to-front might not have been the best idea. This dawned on him while observing some construction workers at the top of a ladder attempting to build a factory chimney from the top downwards. His next step was to draw inspiration from the work of Donald Winnicott, the English psycho-analyst who had his own method for extracting the creative potential from his patients, especially children. He’d pass them an unfinished drawing and tell them to finish it. He called it The Squiggle Game; it might make sense to think of it as a more interactive version of the Rorschach ink-blot test.

MacSween achieved creative breakthrough when he finally saw the trap he’d built for himself. Instead of following his own ground rules, he took Gilardino’s work and “elaborated more freely”, thus producing the resulting album. We still have many guest players — Corinne René supplying even more percussion, the contrabass of Nicolas Caloia on two tracks, and the guitar playing of Sam Shalabi who provides much-needed detail and weight to this rather insubstantial set of nontunes. (Shalabi has also worked with The Invisible Hands and Fortner Anderson.) But it’s not clear if this is the original Gilardino dream-team lineup, or what. That’s not even his drawing on the front cover (in fact, it’s by Michal MacSween). Drive yourself bonkers figuring out at what point MacSween’s re-elaboration kicks in. I was reminded for some reason of Alessandro Bosetti’s work by this album, but in fact it contains far fewer vocals than I remember on first spin, and certainly not as many words per square inch as Bosetti crams into his releases. MacSween is also notable for his contribution to an old 2006 project at Mutek Montréal, where he teamed up with Martin Tétreault to produce a conceptual tribute to Ringo Starr.

We’ve rarely been privileged to hear such idiosyncratic and unusual approaches to the construction of instrumental music, and the results are quite thrilling with their unexpected byways, forays and sojourns in unfamiliar turfs.