Full marks then for the concept — La Scena Musicale, Québec

Time of the Sign sees the Vertical Squirrels shift from performances as a discrete quartet to a collaborative organism working with other improvisers.

Sculpted from live-improvised performances recorded in-concert and in studio, the CD features a series of linked musical vignettes and soundscapes some of which were conducted by Dave Clark, founder of Toronto’s improvising orchestra The Woodchoppers Association.

On tracks that build from scurrying flute to dense wall-of-sound band energy, where the scraping sounds of hurdy-gurdy combine with baritone guitar and Kaoss pad delays, where voices and melodies erupt from harmonic overtones, where pedal steel and percussive intricacies interweave, and where the sound of ships in the St. John’s harbor mingle with off-centre free grooves, Time of the Sign makes a distinctive sonic statement about musical possibilities and chance encounters.

Guest artists Jane Bunnett, Ben Grossman, and Scott Merritt, all Canadian musical treasures in their own right, bring compelling new sounds into the Vertical Squirrels mix, resulting in a strange, beautiful, and genre-defying blend of evocative melodies, post-rock vibratory textures, and jazz-based minimalism. Seamless transitions, pattern interference, note-worrying, and sounds derived from collisions between old and new technologies, homemade and traditional instruments — Time of the Sign integrates all of these into a provocative sonic narrative. 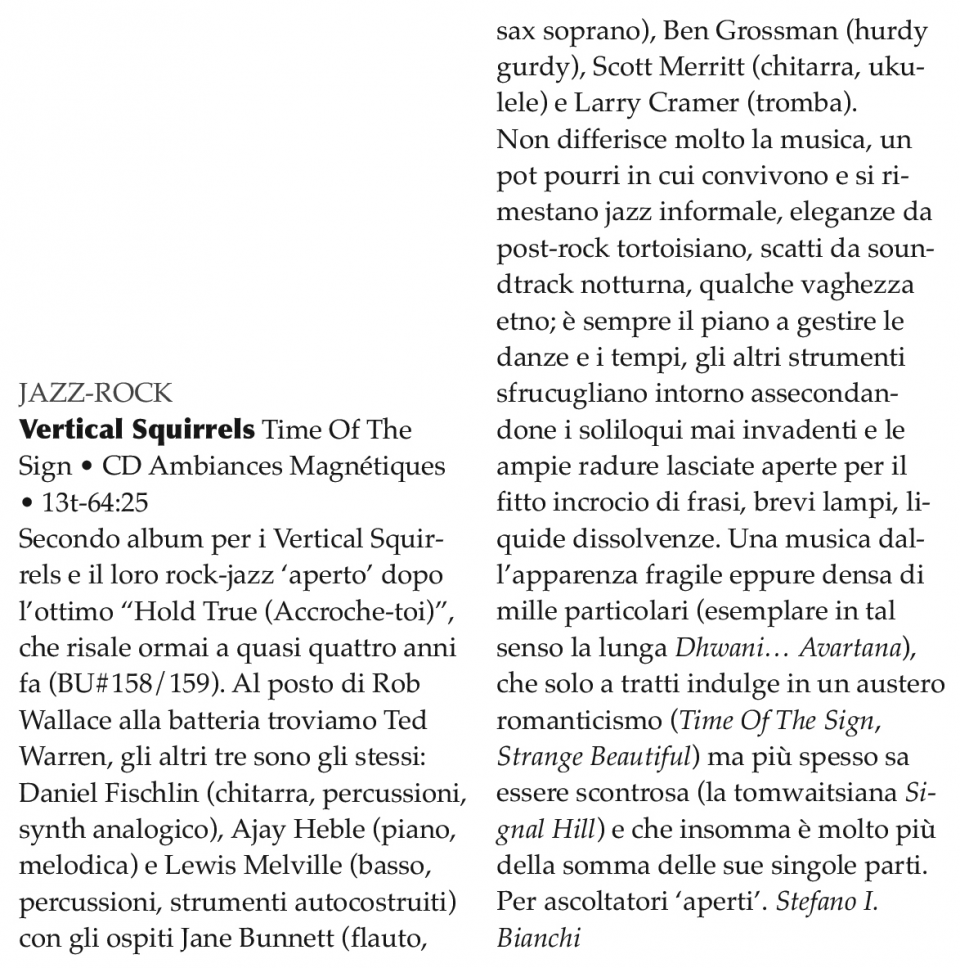 Working out of the Toronto area, this collectively-named sextet is a new entry to the label. Its music, like its moniker, is an intriguing one. Describing it is not easy, save to say that it unfurls in an improvisatory fashion, yet it also relies on familiar compositional devices. For one, defined tonal areas recur throughout the 13 tracks, underscored by ostinato figures (most of which are played by pianist Ajay Heble, best known as the artistic director of the Guelph Jazz Festival). Revolving mainly around strings and percussion, the group is bolstered here by some added guests, most notably Jane Bunnett, in one of her rare detours from her latin bag. For wont of a better term, this ensemble’s music could be labelled as ‘world improv’, whereby all participants serve the whole rather than projecting themselves in front of it (as in jazz). Full marks then for the concept, but still a little too reliant on its devices.

Full marks then for the concept

Vertical Squirrels is a Canadian quartet — Daniel Fischlin, Ajay Heble, Lewis Melville and Ted Warren — that loves to work with other musicians, as confirmed on their latest album, Time of the Sign. The album includes organic sounds, hurdy-gurdy, guitar, flute, percussion, and wind instruments all merged in a very interesting way of improvising that comprises minimalism, post-rock, free jazz, and spiritual jazz. This is not reminiscent [as per their first album with AM] of the work of Frank Zappa, foreign, or German rock bands from the 70s — and I think fans of The Necks will love the album Time of the Sign.