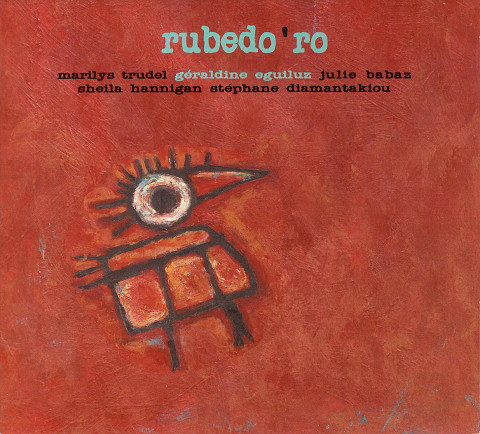 A more magical cauldron of composition and improvisation could hardly be concocted than this creative collection of pieces for voice and string quartet. — The Squid’s Ear, USA

I was completely won over on the first listen, and so will you. — Monsieur Délire, Québec

The compositions of Rubedo’ ro new release, span over a period of six years, since its gestation to its realisation.

It is a very special creation to me as it was borned in the multiple processes and experiences where it’ s take source.

On the one hand, the inner journey lived in solitude and silence, and also the magic of travels and meetings that gave life to each song,

having been exposed to musicians, instrumentations and geographies diverses.

Finally, for sure, the presence and musicality of my traveling companions: Stephane, Sheila, Julie and Marile-Lys who gave their time and talent to achieve this record.

It seems to me that the work fits with accuracy and originality in the musical landscape of today, the multiple tongues and languages, jazz and folklore, classical and contemporary, improvisation and writing, while keeping a sense of poetry, opening to sound, imagination and the secret wish that the music can add a touch of beauty, joy and humanity to the world. 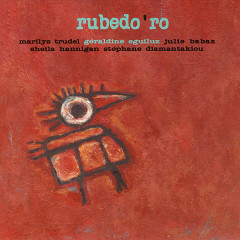 A more magical cauldron of composition and improvisation could hardly be concocted than this creative collection of pieces for voice and string quartet. I had the opportunity of attending the premier performance of this project in Montreal before it got “waxed," and the recording is every bit as magical as the live rendition of the pieces.

Composer and singer Equiluz has imagined a finely inflected set of nine movements. Not always articulating an explicit text, the voice is used as a fifth instrument in a kind of multilingual scat style. The strong geo-historical connotations of the string quartet (i.e. Europe’s noble courts c. 1700s and on) are here subverted in idiomatic writing combining indigenous sounds of the Americas along with free improvisation and tightly rendered ensemble writing that evokes many local colors, from the lush valleys of Mexico, to the Brazilian Rainforest, to the shouting of the Thunder Beings on the North American plains, and more.

Born in Mexico, the cosmopolitan Equiluz has lived in Columbia, Paris and Lisbon, before coming to Montreal by way of Quebec City. She has performed internationally and is a frequent collaborator with musicians in the thriving Musique Actuelle scene in the province of Quebec. In this ambitious project, a polyglot sensibility comes through loud and clear in the multi-stylistic qualities of the compositions, with titles in a number of languages, like the opener “Aluxes" which announces the music to come via allusions to a playful Maya spirit being, and other titles, like “Tiempo Herido," that reflect a more mournful mood, or the rhythmically possessed piece called “Tonnere."

In Rubedo’ro, Equiluz is joined by four Montreal string players: violinist Marilys Trudel, viola player Julie Babaz, cellist Sheila Hannigan and bassist Stéphane Diamantakiou. The ensemble is honed to render in very precise playing the music Equiluz has penned, but as mentioned before, there is also plenty of improvisation, and individual expression worked in, which makes this release so interesting: it sings with a clear authorial voice, but is emboldened by the multiplicity of personalities, making this a very living, vibrant set of music. The stylistic twists and turns make for an exotic ride along the fine edge that composed material meets improvisation can provide, but the writing here is also a solid and taut high wire along which dance the many colors of Equiluz’s richly textured, warm and expressive voice.

A more magical cauldron of composition and improvisation could hardly be concocted than this creative collection of pieces for voice and string quartet.

Wonderful! Géraldine Eguiluz is simply wonderful! A singer full of charm, emotion, and creativity, she strongly brings to mind, on this debut CD for Malasartes, the great Iva Bittová, except that Eguiluz bases her wordless singing on Latin American influences instead of Central European ones — and this comparison is no disservice to Miss Eguiluz, believe me! Rubedo’ro features nine of her own compositions for a string quintet: four string instruments and her own vocal chords. Sleek arrangements that navigate the ocean between chamber music, Latin American music, and musique actuelle. I was completely won over on the first listen, and so will you.

I was completely won over on the first listen, and so will you.