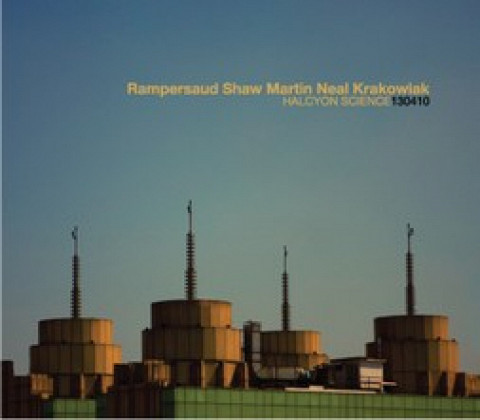 Enhanced freedom in music over the past 60 years has involved more than the addition of new instrumental techniques and compositional strategies. — The WholeNote, Canada

Halcyon Science 130410 (Barnyard br0323), features the electroacoustic improvisation quintet of Evan Shaw (alto saxophone), Nicole Rampersaud (trumpet), Jean Martin (drums and laptop), Wes Neal (double bass), and Tomasz Krakowiak (percussion). This studio recording is made up of intelligent and inspired compositions by Shaw and Rampersaud, and deft ensemble improvisations that draw on the lateral influence of science fiction as readily as they do that of their most obvious (but far from sole) musical forbear, jazz. 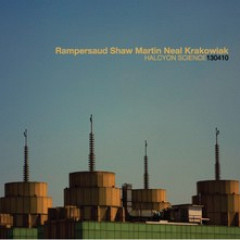 A strong free improvisation concert recorded in April 2010 in Toronto. Very fine interplay between Rampersaud’s trumpet and Evan Shaw’s saxophone — you could easily believe some of their lines were pre-written. The work of Polish percussionist Tomasz Krakowiak remains mysterious, his very subtle textures blending in with the other sounds. Serious music, though not scholar; demanding music that never sounds forced.

Enhanced freedom in music over the past 60 years has involved more than the addition of new instrumental techniques and compositional strategies. Recasting of gender roles has also taken place. No longer are women instrumentalists expected to play traditionally delicate female instruments such as violins or flutes; or those where they sit demurely such as the piano, harp or cello. This change is most obvious in improvised music, where the number of women who stand up to play has multiplied exponentially. Many have chosen to become brass players, adapting their skills to apparatuses which demands power and stamina.

Take Toronto trumpeter Nicole Rampersaud for instance. The high-quality improvising she exhibits on Halcyon Science in the company of saxophonist Evan Shaw, drummer Jean Martin, bassist Wes Neal and percussionist Tomasz Krakowiak doesn’t distinguish in any way between her talents and those of her colleagues. During seven group compositions, the quintet vaults back-and-forth from high-energy anthems to more cerebral explorations with equal skill. Take me To Your Leader is an example of the latter, as clattering friction from Krakowiak’s noise-makers evolves in stacked counterpoint alongside Shaw’s irregularly squeezed vibrations plus the mouthpiece suckles and tremolo emphasis of Rampersaud. Her rubato slurs and valve squeaks intersect perfectly with the baritone saxophonist’s tongued percussiveness as Martin’s ratamacues, pops and drags presage harmonizing vamps and a final quivering dissolve. Meantime the title tune and Dirigible move with a chromatic gait. The former resembles an Eric Dolphy line, with repeated climaxes interrupted by mid-range honks from Shaw and stuttering pitches from the trumpeter. Dirigible stacks timbres so that space between Rampersaud’s staccato and heraldic tone and Shaw’s juddering tempos are obvious. Still a near-bugle call on the trumpeter’s part in the final sequence signals a slowdown to barely there flutter tonguing on her part, accompanied by the reedist’s smooth obbligato, until together they dovetail into muted tones framed by drumstick-rubbing friction from the two percussionists.

Enhanced freedom in music over the past 60 years has involved more than the addition of new instrumental techniques and compositional strategies.