It’s a deep and woody band, never quite fired up, certainly never uptempo, and yet always moving forward, like a clock, perhaps, viewed under a microscope. — The Squid’s Ear, USA

I can’t remember a record by MF Côté that disappointed me. His projects always have something interesting to offer. — Vital, Netherlands

Third album of Mecha Fixes Clocks, first for Ambiances Magnétiques, Teoria dell’elasticità di Girolamo Papariello listens to the speculative theories of Papariello. Recorded live at Studio 270 in November 2010 by a group of 11 musicians — seven French and four English, 7 pieces make up this musical presentation on the spatio-temporal elasticity of body and of the stars. But that does not mean anything…

Let’s be more realistic: a string quintet + two bass clarinets + a trumpet + electric guitar + drums + a pick-up and then you mix it a few minutes, you come back twice, and you let rest 5 minutes. At the end you will have something that looks like Don Slow’s Electric Girl Getter. Not much fun, it’s a record of serious music. 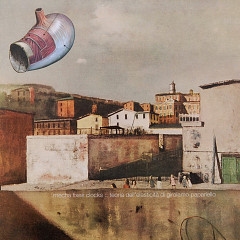 The intriguingly named Mecha Fixes Clocks is an ongoing project of the Montréal percussionist Michel F Côté. It’s a sort of pseudonym, cleverly sharing initials with the composer, and a bit of an explosion of personality, taking a seemingly very introverted approach to music-making and exploding it onto sometimes as many as a dozen performers. And it is, maybe, a sort of methodology, a working process that has been suggested by the composer as a repair shop with musicians as mechanics working to patch up a century already in disrepair. It’s a big job and, for that matter, a pretty huge clock.

From the challenging and ever-changing groups Bruire and Klaxon Gueule to his own evocative works (see Flat fourgonnette (Mescal Free Style), his fascinating take on American song), Côté has excelled at soundscape-with-subtext, and the Mecha Fixes Clocks records might be his most strangely expressive yet. Teoria dell’elasticità di Girolamo Papariello, the third Mecha disc, was recorded live in studio in 2010 and then mixed and constructed by Côté. Consistent yet irregular rhythms run through the seven tracks and backing drones that seem electronic but may be provided by the small string section adhere the improvising instruments, which are allowed to play free jazz at times but never to dominate. At other moments, the strings rise into a proper quartet against the softly banging buzzing of an upright bass. Of course any of those could also be the turntables of Martin Tétrault, so deftly set in the mix as to become a virtual trompe l’oreille.

Côté also has a knack for drawing from different areas of Montréal’s music scene, and this 11-piece assembly of Mecha Fixes Clocks includes Lori Freedman and Philippe Lauzier on bass clarinets, Elwood Epps on trumpet, Josh Zubot and Jean René on strings, Alexandre St-Onge on contrabass and Bernard Falaise on electric guitar. It’s a deep and woody band, never quite fired up, certainly never uptempo, and yet always moving forward, like a clock, perhaps, viewed under a microscope.

It’s a deep and woody band, never quite fired up, certainly never uptempo, and yet always moving forward, like a clock, perhaps, viewed under a microscope.

I can’t remember a record by MF Côté that disappointed me. His projects always have something interesting to offer. Like this one, the third release by his ensemble Mecha Fixes Clocks that is made up of eleven players. Everything is composed by Côté. His music always moves in a mysterious way between rhythm, melody and harmony on the one side, and abstract sound constructions on the other side. As a result this is music that is difficult to grasp, but above all fascinating and intriguing from start to finish. To play with space and time are clearly objects of his composing. Hints of melody surface and disappear in the stream of sounds. It was recorded last year, live in a studio with an extended line-up: Côté, Freedman, Lauzier, Epps, Zubot, René, Thiessen, Martel, St-Onge, Falaise, Tétreault. It is this release by underestimated talent Côté that did it for me of these four releases.

I can’t remember a record by MF Côté that disappointed me. His projects always have something interesting to offer.

The vagrancy of Michel F Côté’s project Mecha Fixes Clocks continues: after an album on alien8 and one on &records, the third opus is now out on Ambiances Magnétiques. Recorded last year at Studio 270, this CD features a new expanded line-up (Côté, Freedman, Lauzier, Epps, Zubot, René, Thiessen, Martel, St-Onge, Falaise, Tétreault). The music is still as mysterious and shapeshifting as before: textural improvisation, occasional suggestions of rhythmical and melodic elements, confluences of synergetic ideas giving the impression not of chaos but of a highly complex compositional will. Different than and on par with the first two albums. I wish long life and ongoing renewal to this great project!

Different than and on par with the first two albums. I wish long life and ongoing renewal to this great project!