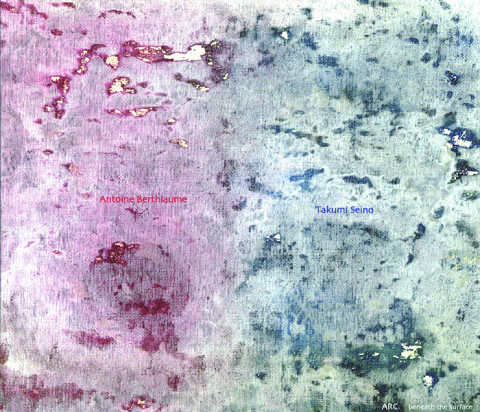 Both are well-educated and very talented guitarists, and what is more important they are intelligent musicians who have something to tell. — Vital, Netherlands

This session, recorded live at Big Apple (Kobe, Japan), is the first encounter between guitarists Antoine Berthiaume and Takumi Seino, who met for the first time in July 2005. Beautifully recorded by Tetsumasa Kondo - both sound engineer and owner of Big Apple - during an amazing performance by both musicians, this record is the first performance of many to come by this exciting and unpredictable duet. A new taste of “avant-garde guitar” served by up and coming guitarist Berthiaume and Takumi, Japan’s best guitar player according to Yamaha’s 1985 Osaka competition. [AB, ii-06] 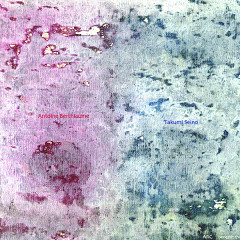 ARC — Beneath the Surface

On july 18, 2005 Berthiaume and Seino gave a concert at Big Apple, in Kobe, Japan. It is perfectly recorded and made available on this cd. And it was worth it. Because this duo offers some really innovating guitarwork that’s hard to describe. Both are unknown guitarists. Berthiaume debuted a few years ago with a cd with duets with Fred Frith and Derek Bailey. It was followed by a cd in trio format with pianist Quentin Sirjacq and sound engineer Norman Teale. Both cds were released by Ambiances Magnétiques. But of the two players Seino seems to be most experienced one. He has already several cds out, just explore the VOS catalogue. He had his own trio, and group and was engaged in numerous — mostly japanese — collaborations. Both are well-educated and very talented guitarists, and what is more important they are intelligent musicians who have something to tell. If easy listening and avant garde can go together, I would say this describes some of their improvisations, like the first part of track 6 or the solo piece by Berthiaume. Also the title-track is an excursion into spacious and echoing guitar-sounds that makes them more related to Frisell or Fripp-like soundscaping then to Frith or Bailey-inspired improvisations. But at other moments they chose for a very hectic, distorted and dynamic approach, like in the end of the title track. Although the cover makes no mentioning of it, it is evident that both have surrounded themselves with lots of technical and electronic devices. But the gentlemen are throughout in charge of what they are doing and deliver some very engaging music, true sonic symphonies I would say.

Both are well-educated and very talented guitarists, and what is more important they are intelligent musicians who have something to tell.

When the young Montréal-based guitarist, Antoine Berthiaume’s first disc came out on Ambiances Magnétiques, it featured Antoine performing duos with both Derek Bailey and Fred Frith, two of the elder statesmen of modern improv guitar. This was quite a surprise to many of us who had not heard of Antoine before this. Since then, Antoine has another fine trio disc out on DAME and has also played a solo set here at DMG last year. He recently came to visit and left us with copies of his new duo disc with a Japanese guitarist named Takumi Seino, another musician with whom I was unfamiliar. This duo disc was recorded live at Big Apple, in Kobe, Japan, in July of 2005. Both of these sonic explorers appear to by using a variety of devices to alter their sound. Antoine often sounds Frith-like with his use of volume swirls but uses other odd devices to come up with different space/rock guitar sounds. Takumi is a well-matched guitarist, although it sounds as if he has a rack of sonic effects, twisting his electronic sounds into all sorts of strange shapes. I am reminded at times of those Frith/Kaiser duos, which don’t sound too much like they are produced by guitars. The title track is a long (nearly 22 minute) epic of cosmic, mesmerizing sounds that should make many space rock & prog-heads smile. Both Antoine and Takumi have fine 10 minute solo pieces that show their unique sound quite well. Both guitarists play lovely pieces which are semi-acoustic works that are quite elegant, melancholy and jazz-like in tone. The final duo, White, Wisps of Red and Blue, features some eerie bowing and variety of bizarre sounds that build into spacious alien worlds. Considering that neither of these guitarists is very well known, this is a most successful duo of extraordinary sonic magicians.

… a most successful duo of extraordinary sonic magicians.