In this new project, Jean-Marc Hébert makes us share his colorful musical interbreeding: a new territory in which are imbricated Arab, Indian and African scales, intermingled with western rhythms. This quartet is also a privileged meeting between musicians of various traditions - world music, jazz, musique actuelle - who, for the occasion, join this voyage cheerfully. 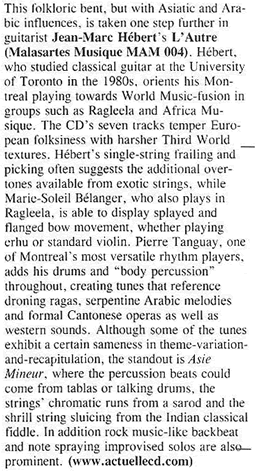 This folkloric bent, but with Asiatic and Arabic influences, is taken one step further by guitarist Jean-Marc Hébert’s L’autre. Hébert, who studied classical guitar at the University of Toronto in the 1980s, orients his Montréal playing towards World Music-fusion in groups such as Ragleela and Africa Musique. The CD’s seven tracks temper European folksiness with harsher Third World textures. Hébert’s single-string frailing and picking often suggests the additional overtones available from exotic strings, while Marie-Soleil Bélanger, who also plays in Ragleela, is able to display splayed and flanged bow movement, whether playing erhu or standard violin. Pierre Tanguay, one of Montréal’s most versatile rhythm players, adds his drums and “body percussion” throughout, creating tunes that reference droning ragas, serpentine Arabic melodies and formal Cantonese operas as well as western sounds.

Although some of the tunes exhibit a certain sameness in theme-variation-and-recapitulation, the standout is Asie mineure, where the percussion beats could come from tablas or talking drums, the strings’ chromatic runs from a sarod and the shrill string sluicing from the Indian classical fiddle. In addition rock music-like backbeat and note spraying improvised solos are also prominent.

Both Mailloux and Hébert […] are engaged in an intelligent play with of all kind of influences in a music that always remains very accessible and enjoyable without becoming “easy”.