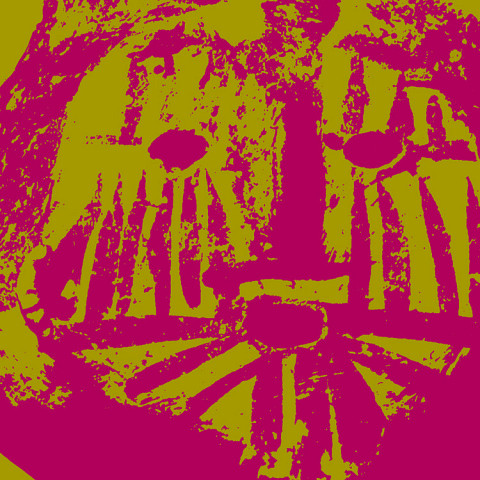 The name of the band may glimpse at literary references, but La Part Maudite, to whomever hears them, reaches for the gut. Presumably inspired by an essay penned by Georges Bataille, whose writings bear the influence of Friedrich Nietzsche and the Marquis de Sade, the music is straightforward, loud, and exhilarating. One feels, by listening to them, that they prepared a soundtrack for a movie yet to come, filled with images of wild parties and sinister alleys drenched in menace. As in most of Bataille’s stories, though, one never forgets that darkness can be borne out of playful innocence.

Here is a bunch, after all, of twenty and thirthysomething who obviously enjoy toying with electricity like mad scientists who’ve just discovered the Mighty Powers of Distortion. Hence this first set, whose atmosphere and texture-centered pieces would qualify for the sometimes highbrow abstract/experimental label —although its delivery seem closest to the sheer sense of fun of a good rock jam: tight yet loose, focused yet aloof, dark yet imbued with a good dose of festive energy and humour. Because they care, you see. They want you to be in on the joke and have a good time: as good as the one they are obviously having, bringing the music to your own sound system, after weeks of practice in decrepit rooms, and many a candlelit hour spent alone, pondering the evil miasmas Bataille’s dark ramblings. —Jean-Philippe Gravel 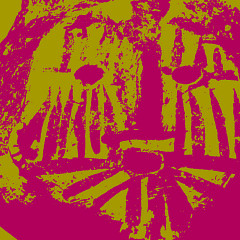 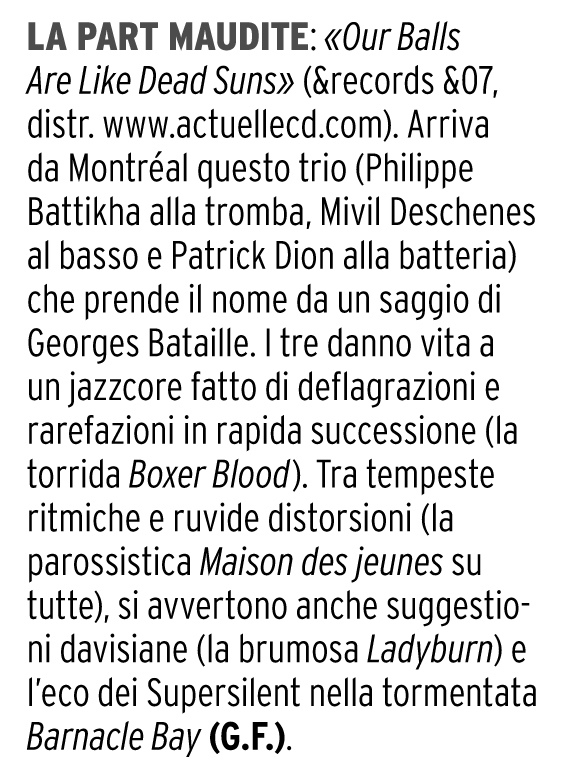 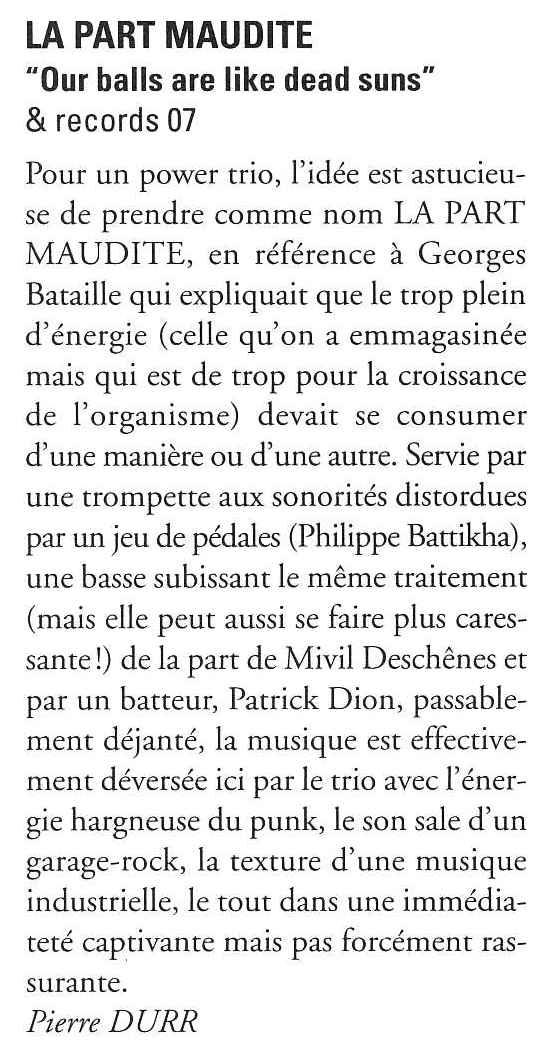 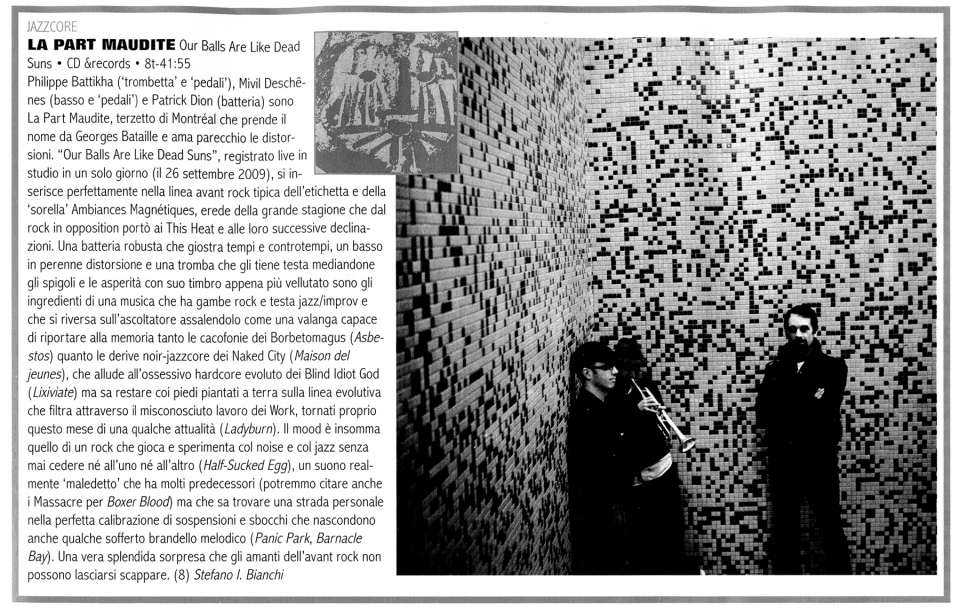 Canada’s Et Records has been going since 2003, and so far released nine releases. These three are all recent, so their catalogue suddenly expands in a big way. We find this label in the world of improvised music. The first one is by one Jean René, who plays acoustic and electric viola and electric guitar. Unlike many of his peers, René plays his instruments in such a way that we can recognize them. The viola is a viola, the guitar is a guitar. That is, perhaps to some, a traditional approach, and that’s also an approach we find in his music. A piece like Outardes sound almost like baroque music. That is however a rarity. Another rarity is Morue, which is the most onkyo piece around here. In his other pieces he shows a love for minimal music in a classical sense. He uses a bit of delay on some of the pieces, to add that sustaining sound. Sometimes it reminds me of very old Steve Reich or Philip Glass music (Prune could be a small version of Violin Phase), but René keeps his pieces very short (somewhere between two and five minutes) and presents them as small miniatures.

Behind Mecha Fixes Clocks we find Michel F Côté (keyboards, electronics, microphones, drums and percussions), but unlike his other releases, this is not a solo or duo work, but, at least from what I gather, a work he composed and plays on, but with extended group of thirteen players, among them Martin Tétreault, Tom Walsh and Jean René. Instruments listed include trumpet, flutes, guitar, clarinet, french horn, trombone and such like. Nine pieces of some great orchestral music. Moving slowly, like gentle minimal music, which slowly, over the course of these pieces built up. It combines improvisation (although sparsely here), with minimal glissandi and small melodies, which rise up from those gentle waves of heavily and heavenly layered small orchestral sounds. Think Olivia Block, but perhaps with a bit more improvisation in some parts. Great chamber music, relaxed atmosphere, jolly fine music.

La Parte Maudite is a trio of Philippe Battikha (trumpet, pedals), Mivil Deschênes (bass, pedals) and Patrick Dion (drums). This is, at least for me, the release I didn’t like that much. The music is that of a heavy nature. Loud bursts of controlled and probably less controlled musical outbursts. Music that comes from that specific cross road of improvised music, loud rock and free jazz. Loud and blearing. One of the things that made me not like this that much was the use of the trumpet. It seems to be coming, at least for me, too much from the world of jazz. I understand the raw power and energy of this trio, but in the end the result didn’t win me over. I’d rather go back to the previous two releases.

A Montréal-based trio, first time I see any of these names: Philippe Battikha (trumpet), Mivil Deschênes (bass), Patrick Dion (drums). A power trio playing, skronk-like jazz-punk with a hint of funk rock. Similar to (juste) Claudette and Elephant9 minus the organ. Nice attitude, edgy, not constantly over-the-top. A convincing debut.

Lots of balls and promise on this first release by Montréal trumpeter Philippe Battikha’s shredding power trio. Lots of insistence too, good and bad. A unified conception and tireless devotion to repetition of simple materials serve well. A minus is the monochromatic approach to trumpet sound. Played mostly like an overdriven electric guitar, we miss the revealing sound of the open horn. An intriguing engagement between the tender and the ferocious. 7/10

An intriguing engagement between the tender and the ferocious.