The nine tracks range from lyrical showcases […] to abrasive and gritty scrapes, squeaks and flanges from Martel’s extended strings that contrast with intense, horizontal split-tones from the saxophonist. — The WholeNote, Canada 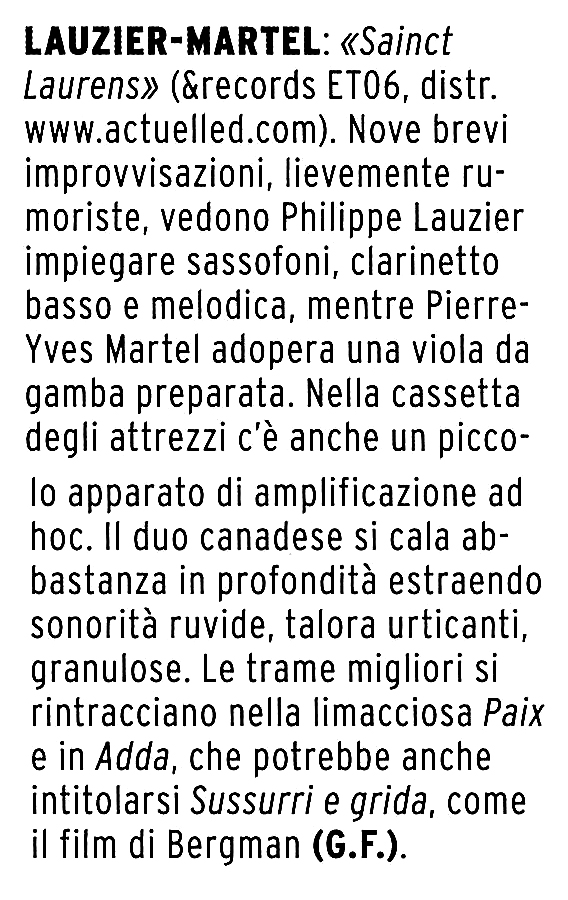 The nine tracks range from lyrical showcases […] to abrasive and gritty scrapes, squeaks and flanges from Martel’s extended strings that contrast with intense, horizontal split-tones from the saxophonist.

Philippe Lauzier (sax) and Pierre-Yves Martel (viola da gamba) are two of the most active recrutes of late in Ambiances Magnétiques’ fold. This, their first duo CD (out on &records, Michel F. Côté’s imprint) is downright splendid. A series of careful pieces in which each sound is weighted yet flows naturally. A journey inside the instruments involved (those above mentioned, plus bass clarinet, tubes, melodica, small speakers, radios, and contact mics), but foremost inside a deep-running musical relationship between the two protagonists. You can clearly feel how these two have been and are still making discoveries together. A demanding listen but a beautiful album.

This, their first duo CD is downright splendid.

Excellent discs, both of them.

What do you get when you lock up two creative geniuses in a cabin for a couple days with a viola da gamba, saxophones, a bass clarinet, some radios and two-inch speakers? A beautiful and weird sudoku puzzle for the psyche. This CD shows us how these guys give Montréal a well-deserved rep around the globe as a locus for creative music. The only thing better is hearing them live. (9/10)

The only thing better is hearing them live